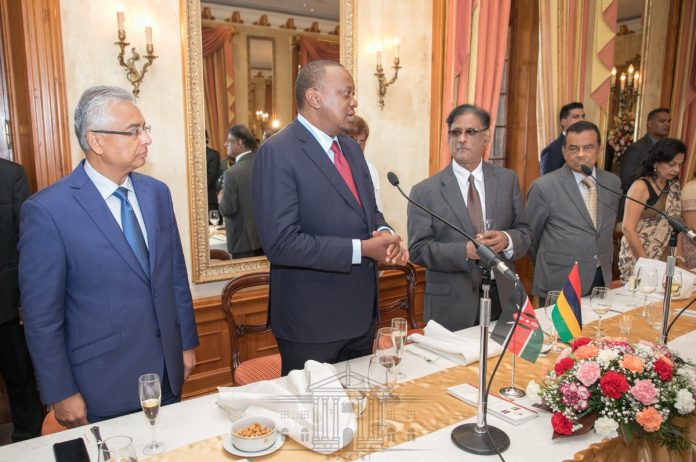 President Uhuru Kenyatta has said the current crop of leaders have the the founding fathers of African states.

The President who is on a four-day State visit of Mauritius said political leaders have the fundamental obligation to ensure that the heritage bequeathed upon them by the freedom fighters is nurtured for the benefit of all citizens.

“We have found you very welcoming, we have managed to visit a number of places and have seen our shared history of struggle which is very similar to our own,” President Kenyatta said.

“It is our own generation whose responsibility it is, to protect those hard won freedoms to ensure those liberties are used for the betterment of our people and our continent,” he continued.

President Kenyatta was speaking today during a state luncheon hosted in his honour by the Acting President of Mauritius Paramasivum Pillay Vyapoory at the State House, Le Reduit.

He challenged African leaders to grow stable and prosperous economies capable of helping their citizens to create wealth and fight poverty.

President Kenyatta expressed hope that Kenya and Mauritius will continue with the exchange visits at the highest levels of leadership with the aim of improving the welfare of the citizens of the two nations.

“I believe there are great opportunities that exist to deepen our cooperation in a number of fields and I believe as we move forward we will continue to strongly work together to ensure that we achieve and reach those objectives,” he said.

Terming his visit to Mauritius as historic, President Kenyatta said there is need for the two countries to foster closer working relations for the sake of development and prosperity.

President Paramasivum Vyapoory said African liberation heroes paid the ultimate price adding that it is now the duty of the current crop of leaders to make their contribution by bettering the welfare of their people.

At the ceremony also attended by Prime Minister Pravind Jugnauth, the Acting President commended President Kenyatta for his commitment to the economic empowerment of Africans, describing him as ‘a symbol of freedom’.

The facility uses latest technology to manufacture, package and export cutting edge devices to over 35 countries across the globe.

The devices manufactured by the company include angioplasty balloon catheters intended for interventional cardiology, interventional radiology, gastroenterology and urology.

President Kenyatta extended his request to the company to consider setting up a similar facility in Kenya to help the government achieve its objective of offering affordable quality healthcare.