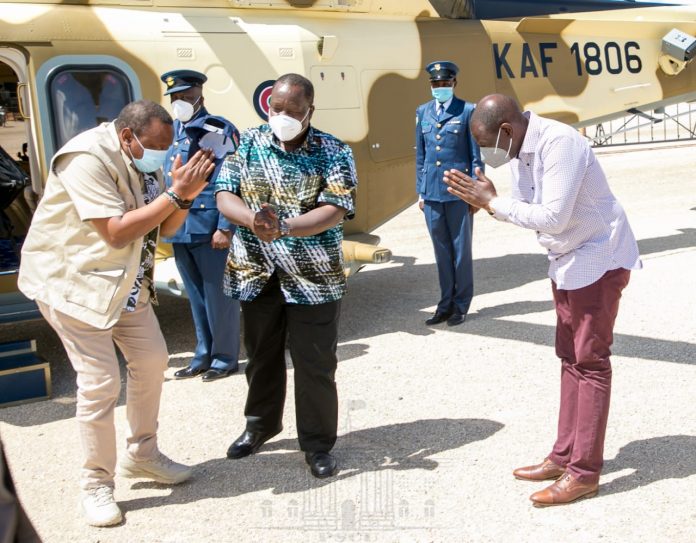 At hand to receive him were Dp William Ruto, CS Matiang’i among others

The head of state is scheduled to Chair a Cabinet meeting, receive progress reports of several national security sector technology projects and preside over an innovation exhibition by young Kenyan techies.

The meetings have been dubbed ‘bonding session’, however sources indicate that President Kenyatta is expected to rally support for his agenda, given the realities being experienced, including the fallout with his deputy William Ruto.

The meeting away from Nairobi in the serenity of Tsavo National Park will also be a moment to consolidate Cabinet in the midst of a clear differences by ministers and DP some being accused of disrespecting the 2nd in command.

A few weeks ago, Environment CS Keriako Tobiko termed the DP as a mere clerk in Kenyatta’s Cabinet.

It’s also reported that in the last cabinet meeting at statehouse five cabinet secretaries had hit out at Ruto of campaigning against a government he is part of.

In the president’s busy weekend, he is also tomorrow, scheduled to host parliamentary leadership from both houses at state house for a session to discuss the yet to be released BBI document.

The Building Bridges Initiative report is likely to be released as soon as this weekend.

The much awaited BBI report is set to roll, as part of the proposals will require to go through parliament as the rest will head to a referendum as indicated by BBI proponents.

DP William Ruto is laying ground to oppose the report with his troops readying for political duel that will have ODM leader Raila Odinga and president Uhuru on other side.

Ruto is keen to use the referendum moment to endear himself to voters as his hustler narrative is quickly gaining ground ahead of the 2022 polls.