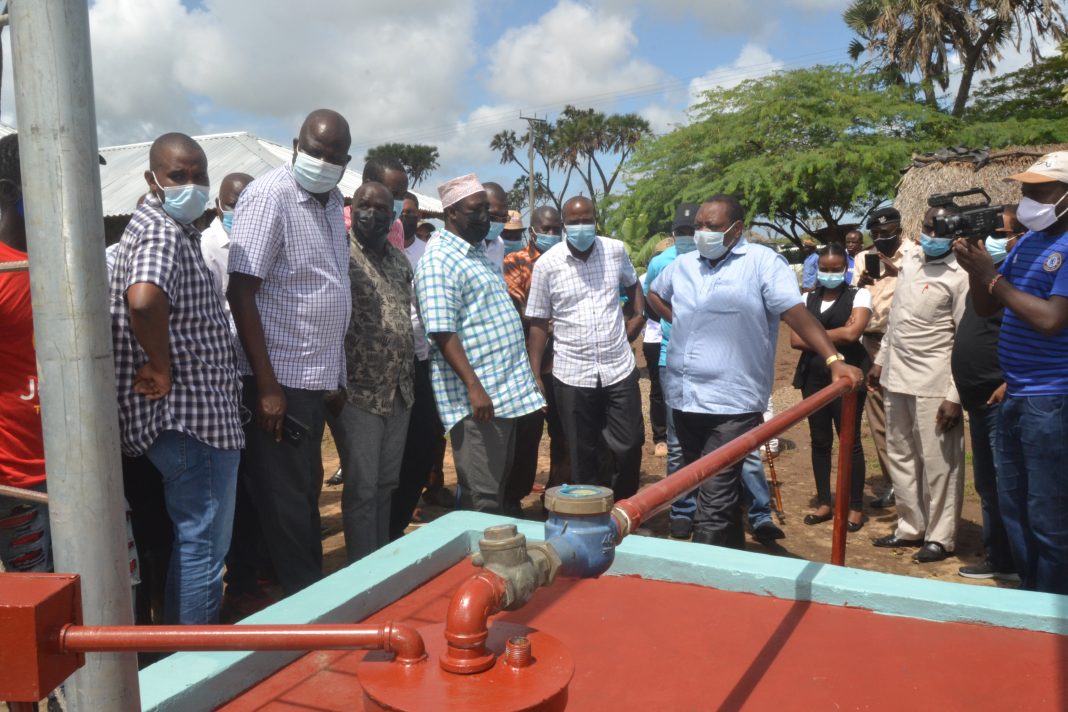 The projects will see supply of fresh water to all the villages of the three sub-counties.

Currently at its advanced stage, the projects are aimed at drilling boreholes, and ensuring the community has access to piped water.

According to Water principal secretary Joseph Irungu, the plan is to ensure each village in Tana River County has access to freshwater.

Speaking to journalists during a two-day tour of Tanariver county, Mr Irungu said each of the projects cost Sh10 million and expressed satisfaction in the manner in which the work was done.

The projects are being implemented by the Coast Water Works Development Agency and are excited to address to its end water problems in the region.

“At times when people hear of Tanariver think the river supplies water to the people but as you have seen and having lived here the river has dirty water even when we decide to clean the water with chemicals at times it cannot fulfill the needs of the residents for consumption it can be used for farming but not for personal use,” he said.

A Borehole To Each Village

Irungu said residents of Tanariver live in villages and the government intends to ensure each village gets a borehole.

He said they will ensure that an area with four villages gets one borehole and uses water pumps to supply the water to the other villages for people to access water.

The PS said the Ministry of Water has got so many water projects in Tanariver county adding that the small projects alone cost over Sh. 1 billion.

“There are projects we do ourselves and others through the equalization fund, such small projects are the ones that really help the community to get fresh water for consumption.

The PS was accompanied by top officials from the Coast Water works Development Agency, led by chairman Omar Boga together with local leaders

During the tour the MP visited Oda, Mandingo, and Kipao boreholes which were built at a cost of sh. 10 million each and are complete.

On his part Boga said they came to launch the projects which were undertaken by the Coast waterworks development agency which he had seen had made an impact.

He thanked President Uhuru Kenyatta and the Ministry of water together with the elected leaders from Tanariver for cooperating with them to ensure they lobby for the projects.

“Coast water has expertise, our aim is to help in any way on water issues by giving the technical support, and I have seen a sh. 10 million project which was done very well here,” he said.

Wario the area MP said the projects have brought relief to thousands of residents who had challenges in accessing fresh water for decades.

He said they have 0observed small challenges of management ion the already completed projects but they had agreed with the county commissioner to address it at the local level with the community leadership.

“We are so happy for these projects there is Oda primary school with 1400 pupils which has no problem as children have access to water, Oda secondary has 400 students and has no problem of water too, the health center also has no problem so we thank the government for this,” he said.

The Galole MP, senator and the MCA all hailed the president for allocating funds to implement the water projects as it is helping locals get access to clean water.

County Governments To Shutdown On June 24 Over Cash Crunch