Home National State Judiciary not immune to the lures of corruption: says Uhuru 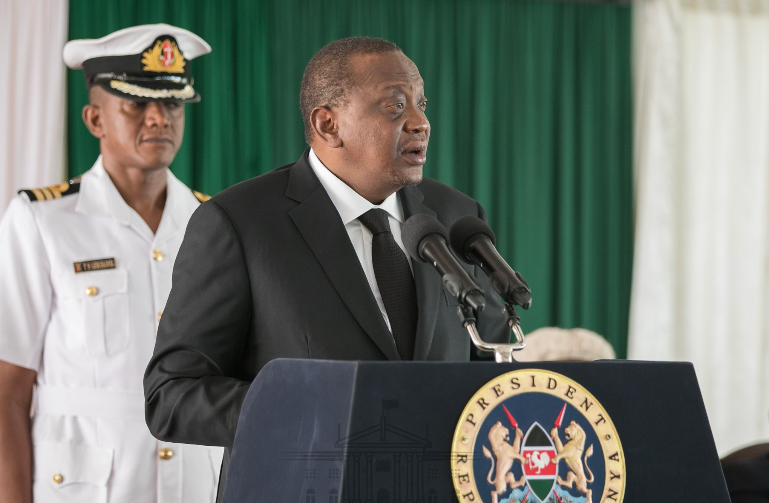 President Uhuru Kenyatta today said the judiciary is not immune to the temptations of corruption and its officers must guard against criminals out to exploit court processes to escape the consequences of their economic  crimes.

President Kenyatta said brokerage of justice has left many Kenyans broken and suffering and their businesses, health and lives destroyed through impunity.

“Corruption is continuing its vicious attack on our people and our nation. The Judiciary is not immune to its illicit lures, and its intimidation,” said President Kenyatta who was accompanied by Deputy President William Ruto, and the two speakers of the National Assembly and Senate, Justin Muturi and Ken Lusaka respectively.

The President spoke at the Supreme Court grounds, Nairobi where he witnessed the presentation of the 7thState of Judiciary and Administration of Justice Report (SOJAR), 2017/18.

The annual report is a statement of accountability in which the judiciary details its successes and challenges during the year in review while drawing a roadmap on how to fix the identified gaps.

Brokers of justice, said President Kenyatta , have persistently exploited the judicial system to block and stall government projects worth huge  sums of money.

“ As I speak today, projects worth colossal amounts of money have stalled, either because the court has put injunctions or stopped the processes all together,” he said

The President said it was unfortunate that a thread of selfish individuals have continued to block government projects with undeclared interests and in the process left many Kenyans suffering and denied essential services.

“And as if this is not enough, the tax payer has to honour interest and penalty payments on loans for stalled projects,” said the President

Chief Justice David Maraga agreed with the President that corruption was endemic in the country, including the Judiciary and urged all Kenyans to say no to it.

President Kenyatta said no Kenyan is above the law and the judicial system should not be used to protect some individuals.

The President said that there was a growing feeling among Kenyans that some judicial officers and legal professionals are beyond the reach of the law.

“A crook is a crook, whether in a Judge’s or an Advocate’s Robes, and should not be treated any different from a crook in overalls. If anything, the Judiciary should hold itself to higher standard,” the Head of State said

The President said only when the judiciary subjects itself to the same standards it expects from other Kenyans that the citizens can have continued faith in the bench.

He said Kenyans hunger to live in a fair country where the rules apply to all and, morality and the law are upheld.

The Head of State said outside the court rooms, Kenyans  are crying for three things–action against those misappropriating public resources, protection from terrorists and for justice to be done and seen to be done.

While reiterating his commitment to uphold and safeguard the constitution, President Kenyatta asked the judiciary not to excuse or lower the burden of proof in all trials, but ensure that this determination is made honestly and lawfully.

He commended the judiciary for playing its role, sometimes with very courageous judgements, but called for respect of the constitutional separation of roles and powers among the three arms of government.

The President said Kenyans expect more from the judiciary because they know that this arm of government has the capacity to meet and exceed its expectations.