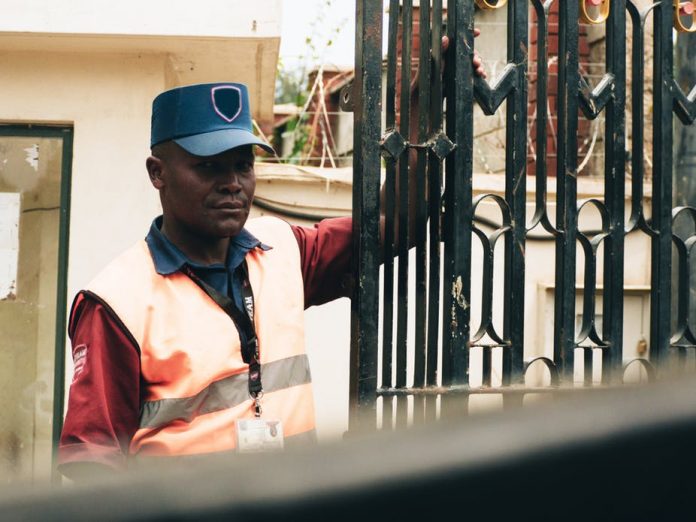 As is the case in many cities around the world, security in Kenya’s capital Nairobi is provided by a variety of groups. These include state actors like the police, as well as groups that aren’t managed by the state: private security companies and community initiatives – like neighbourhood watches.

In Kenya the private security industry first emerged in the 1960s on larger industrial sites. Growing commercial demand, and rising crime rates, meant the industry grew steadily during the 1990s. After the Westgate mall terror attack in September 2013, when 67 people were killed, it experienced an exponential boom.

Concrete data on the number of security firms are hard to come by because, before 2017, there was no state regulation of the industry. But Kenya’s private security industry estimates that there are 400 000 or more private security guards, 3 000 security companies and 100 000 police officers.

Security guards and police officers have different rules that apply to them when it comes to carrying firearms. Private security officers aren’t allowed to possess a firearm while on duty. Police officers are compelled to.

This has given rise to partnerships, over the past 20 years, between private security companies and police units. There’s a lot of diversity in how these work. Some of the partnerships are formalised, while some are informal. Some involve a few police officers or a unit, some the entire station.

We wanted to understand the role of the state police and how they related to private security companies and residents’ associations.

We found that Kenya’s police service dominates Nairobi’s security arrangements. One police officer described partnerships between different security actors as an exchange of “arms for mobility”: private security companies provide resources, like vehicles, police officers provide firearms, and then they patrol together.

Because of these arrangements, crime information is shared and police officers are able to patrol certain areas which, because of few resources, they otherwise might not be able to. In turn, private security companies are able to provide armed protection to their clients, which is regularly used as a marketing strategy.

A large part of our research involved qualitative fieldwork between 2014 and 2016. We attended meetings of neighbourhood, police and private security associations. We also tagged along on security patrols and interviewed security personnel, police officers and residents. This work was all conducted in the affluent areas of northwestern Nairobi.

The private security companies defined themselves as auxiliary to the state police. They saw themselves as playing a supportive role by acting as the state police’s “eyes, ears, and wheels”: they provided the police with information and gave them crucial resources – like transport – that they sometimes didn’t have.

This assistance is invaluable considering that police stations in Nairobi are known to be extremely under-equipped, to the point that officers can’t carry out their work. Vehicles and fuel are among the scarcest resources.

By law, only the police are allowed to carry guns, so they provide the firepower. This arrangement is mutually beneficial. In return, police officers are supported financially and materially, which allows them to patrol certain areas, and private security companies can offer armed protection to their clients.

Yet despite this “exchange”, the police were largely in control of these partnerships. Members of the private security industry looked to the police for permission and guidance. This was particularly the case when it came to the use of several objects – like sirens, bulletproof vests, and uniforms – which they need police permits to use or carry.

But the private security industry played a key role for the police too, helping the police to carry out their essential tasks.

Patrolling, a core state police task which is meant to show visibility and to reassure the public, could only be done with the help of private actors and their vehicles.

We also found that residents’ associations were actively involved in this system. For instance, they often provided “gifts” to police officers and police stations in Nairobi’s upper class neighbourhoods. These took many different forms. In one neighbourhood, the residents’ association provided an extra daily income for the officers on duty and regularly helped to paint the station gates.

Confined to the rich

Because of these partnerships, the police are placed into a network of heightened visibility and accountability. This is something that is often felt as lacking by Nairobi residents.

However, as it stands now, many of the security arrangements discussed here reinforce the idea that security is something that residents should pay for – rather than something provided by a state to its citizens.

This means that less wealthy neighbourhoods or poor income settlements do not have the same amount, or level, of service and creates a huge inequality in how residents are protected. This undermines the police service’s ultimate role: to maintain public order, safety and ensuring law enforcement for all.