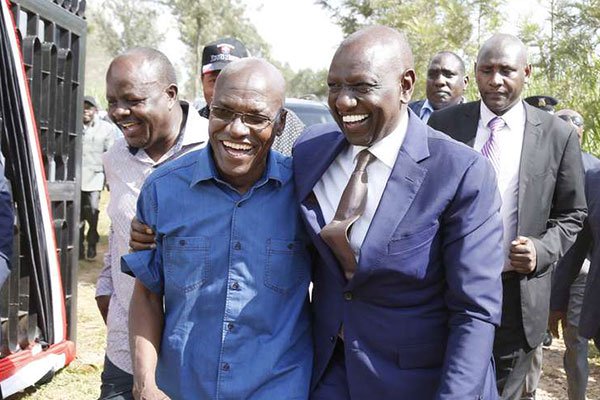 The former Prime Minister was hosted by Kakamega County Governor Wycliffe Oparanya at his Mabole home in Butere.

“I am privileged to host former Prime Minister and Party Leader Rt Hon @RailaOdinga at my Mabole home in Butere. Baba landed here a short while ago and I will have dinner with him before we have a consultative meeting to discuss issues of national importance,” said Wycliffe Oparanya.

The African Union Representative, who in the past enjoyed a massive support from leaders and residents in Western Kenya seems to have lost this support.

Khalwale on his twitter handle Raila hadst his grip in western as witnessed by the people who go to receive him once he lands in the region. In the past, massive crowds were witnessed receiving the ODM leader.

However, this has changed, and his massive support from leaders and residents seem to have shifted to his political nemesis Deputy President William Ruto.

In his statement, Khalwale, who is a close ally to DP Ruto, noted that Raila Odinga’s goose in Western Kenya is cooked.

He said that the meeting had no senator, has one MP, 18 MCAs and 2 Governors only.

”The @TheODMparty spinners, armchair analysts and keyboard soldiers don’t quite get it. @RailaOdinga’s goose in Western is cooked! Despite even spending a night there his meeting attracted no senator, one MP, 18 MCAs & 2 governors who are persons of interest to the EACC,” said Boni Khalwale.

Kakamega a vote reach county has witnessed presidential hopefuls make inroads to try and appeal to natives. Raila’s is banging on Oparanya as deputy party leader to solidify his support base that he has enjoyed in elections. Oparanya had hinted over hanging county politics for national politics. ” Where you direct me I will go” Oparanya said in the meeting. The Kakamega governor is keen to bargain for a stake in the next government with passage of BBI that will see an expanded executive with a prime minister and 2 deputies.

However, Mudavadi and Wetangula are keen to solidify their support with Mudavadi positioning to go for presidency. Ruto through his cronies in Khalwale, Malulu, Injendi and Benjamin Washiali are fine tuning the Ruto presidency. The region has in the past support Raila Odinga.