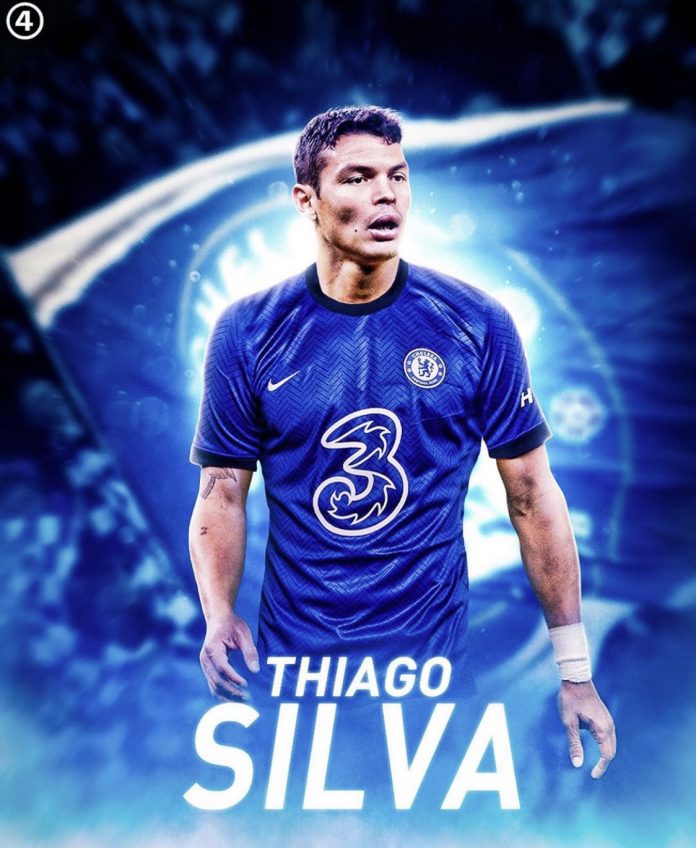 Chelsea have confirmed the signing of veteran centre-back Thiago Silva as the Brazilian defender makes the move to Stamford Bridge after departing Paris Saint-Germain.

Silva’s move to Stamford Bridge comes after his eight-year PSG stay came to an end following the club’s loss to Bayern Munich in the Champions League final.

The 35-year-old, who served as captain in that defeat, departs the French side with a joint-record seven Ligue 1 titles as well as five Coupes de la Ligue and five Coupes de France.

During his time in Paris, Silva made a total of 315 appearances, including 21 this season as PSG won a domestic treble.

Silva, who makes the move on a free transfer, has now joined Chelsea on a one-year deal with the option of extending that deal by one further season.

In addition, the club has already completed the signings of Malik Mothersille, Jimi Tauriainen and Xavier Mbuyamba this summer.

Blues director Marina Granovskaia told the club’s official website of landing Silva: “We are delighted to be able to add a player of Thiago Silva’s proven world-class credentials to our squad.

“Having performed at the highest level for many years, we have no doubt his experience and quality will complement the many exciting talents we already have here.

“Thiago will be an excellent fit and we hope he can add some new trophies to his impressive list of honours.”

Before his trophy-laden spell with PSG, Silva emerged as a star with AC Milan during a three-year stint with the club from 2009-12.

He helped Milan claim the 2010-11 Serie A crown, becoming one of the best defenders in the world before joining the Ligue 1 club.

His move to PSG came with a reported fee of €42 million, making him the then second-most expensive defender in history at the time behind Rio Ferdinand.

Internationally, Silva has been a mainstay for Brazil throughout the last decade, earning 89 total caps while scoring seven goals for his country.

Silva has won silver and bronze at the Olympics with Brazil while also claiming the 2013 Confederations Cup and the 2019 Copa America crown on home soil.

Additionally, the defender has been a part of three World Cup squads and has also been at the Copa America on three occasions as well.

Chelsea enter the 2020-21 season after finishing fourth in the Premier League in Frank Lampard’s first campaign as manager.

The Blues will open the Premier League season at Brighton on September 14.

Aguero, Salah, Henry: Who has the best minutes-per-goal ratio in Premier League history?