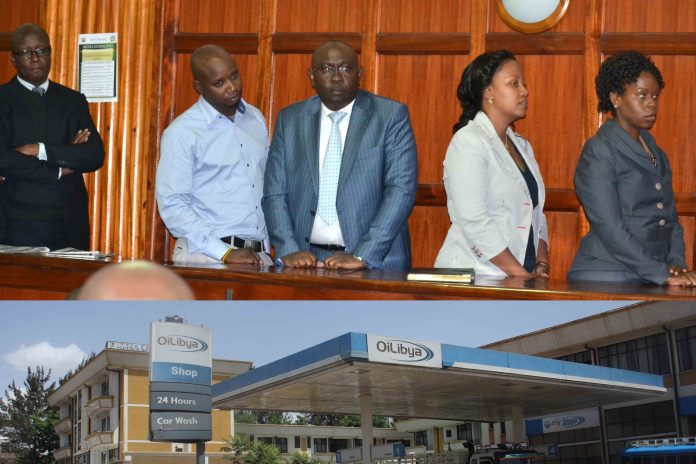 BY PRUDENCE WANZA – Five people have been charged of breaking into Oilibya Service Station, Juja road, and stole property Worth over 1.5 million.

The are also accused that on June 7,2017 at Juja road Service Station they willfully and unlawfully damaged 5 door padlocks valued at Sh.12,500 the property of Maced Limited.

Maced Limited is said to have been in agreement with Libya Oil Kenya Limited to operate the Oilibya Juja Road Service Station and resell Oilbya products at the service station.

According to Oilbya, Maced was in breach of agreement and failed to maintain the minimum inventory levels and having unpaid cheques in respect to products delivered to Maced by Libya Oil Kenya Limited.

Thereafter Maced Limited made a criminal complaint alleging breaking and entry in to the Service Station and theft of property where three of their employees Waeni Kwainga, Anthony Muraya and Joyce wanjala as well as Libya Oil Kenya Limited employee Samuel Marete were then charged in court on August 2017.

Thereafter on 23rd January,2018 the prosecution withdrew charges against all the accused persons after a claim by the DPP that the matter is a civil one which was being dealt with the Civil Suit as referred to Arbitration.

Later on 30th May,2019 the high court ruled that the case stays as a criminal matter  and be mentioned on 4th June,2019 which resulted to the accused persons being charged and taking plea today.

All the five accused persons denied the charges before Senior Principal Magistrate Kennedy Cheruiyot at the Milimani Law Courts.
According to lawyer Ochieng Oduor who represented the accused persons in court,they were ready to begin trial in the case.

“Your honour the accused persons were released on Sh.100,000 cash bail each and for the sake of consistency i plead that they be released on the same since the court had not refunded the cash bail they paid ,”he said.