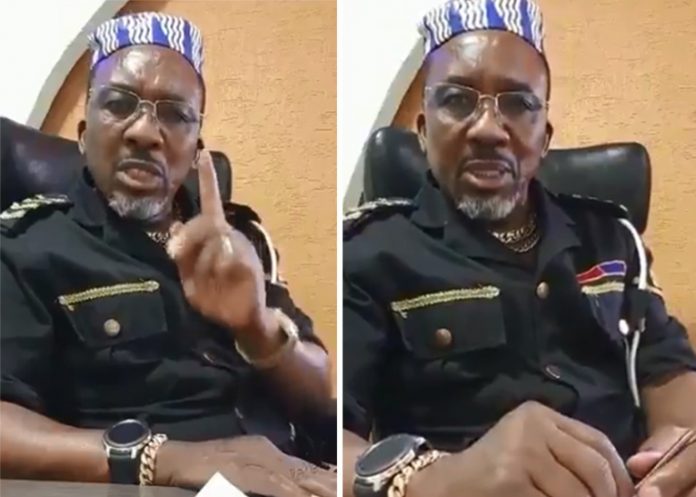 BY ABEDNEGO MBUA – Bishop James Nganga of the Neno Evangelical Church is literally on fire. This time not fighting the ghosts he claims to exorcise, but fighting with Clergy attached to his Church and the Media.

Last week, the ‘Bishop’ (whatever that means) released  a video that  went viral, with voice and appearance that resembled the controversial bishop, was heard hurling insults and expletives to Pastors attached to his known Church.

Ngang’a, in a very aggressive and abusive language is heard calling Pastors useless people, street urchins and even threatened to sack them.

Reason/ they were a bunch of useless people who owe Ng’ang’a every penny they claim under the sun…. and even the oxygen apparently …

His main concern is that these pastors don’t respect Ng’anga’s first  lady and wife. And therefore he angrily lashed at them, daring them to either respect her or leave his church.

In a previous video release, Ng’ang’a is accusing the Media of waging a smear campaign against him, by claiming that he had been jailed over theft. He goes further to mock the Government by urging investigative agencies to probe why he was always facing tribulations.

However, the Media regulator Media Council of Kenya (MCK), stepped forward and issued a stern warning against the pastor, directing him to report to the MCK if at all he had any problem with the media.

Five hard questions about Ng’ang’a must now be asked:

1.       Is Neno Evangelist a public church, a cult of business venture of Nganga

2. Is Mrs Ng’ang’a a demi-god to be worshiped by Pastors accredited to the Church

3. Are the abuses and vitriol Ng’ang’a uttered on his own pastors not components of slender

4. Does Ng’ang’a have a mental problem or could he be in a trance triggered by cultism?

5. Is Ng’ang’a as a public figure allows to belittle the Government of Kenya, the Police and the people of Kenya by asking the Government to investigate a matter that clearly is non existent?

6. Has Ng’ang’a filed complaints against the Media at the Media Council of Kenya or any other police station

7. Is the Neno Evangelical group a front for other business in view of the Ng’ang’a wife superiority contest with men of the Collar.

Once these concerns about Nganga are addressed, investigative agencies including the media, owe us an expose as to who the real Ng’ang’a is. So that the Kenyan public can interrogate who this man really is.