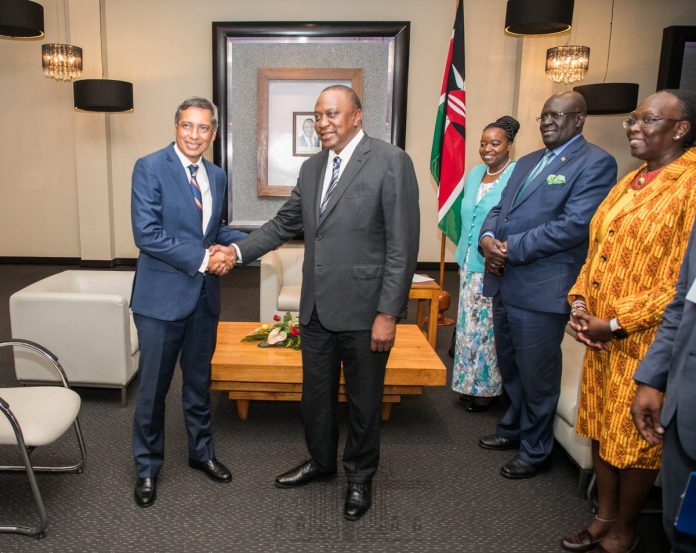 President Uhuru Kenyatta has been lauded for his transformative leadership which has continued to change Kenya for the prosperity of her people.

Speaking last night when he hosted a State Banquet in honour of President Kenyatta who is in Mauritius on a four-day state visit, Prime Minister Pravind Jugnauth termed the Kenyan leader as the ‘architect of a new Kenya’.

The Mauritius Prime Minister said President Kenyatta’s Big 4 development agenda is in many ways similar to the development goals being pursued by his government in order to achieve economic growth, shared prosperity and improved quality of life for Mauritians.

“I’m pleased to note the convergence of our vision and the Big 4 agenda in particular as it focuses on innovation, accelerating growth of the service sector, creating affordable housing and addressing infrastructural deficits” said PM Jugnauth.

He said President Kenyatta’s zeal to transform the lives of Kenyans and Africans as a whole is an inheritance from his father, Mzee Jomo Kenyatta who cherished and was at the forefront in the struggle for the freedom and liberty of Africans.

“Excellency, I would like from the very onset to pay homage to the founder of the Kenyan nation, Jomo Kenyatta, your father. He was  the living embodiment of African nationalism and his love for freedom inspired many to take up arms against colonialism,” the Prime Minister said.

Prime Minister Jugnauth thanked President Kenyatta for coming out strongly to support Mauritius in its efforts to decolonize the Changos Archipelango from the British.

“I wish to recall here Kenya’s prompt acceptance to participate in the public hearings before the International Court of Justice in September 2018 on the request for an advisory opening regarding the legal consequences of the separation of Changos Archipelango from Mauritius in 1965,” he said.

He pointed out that the Mauritius-Kenya relationship is sustained by a common interest of entrenching the rule of law and a deep desire to transform the two countries into engines of growth in Africa.

“The Mauritius-Kenya partnership is premised on the common will of the two countries to evolve rule based systems at national and international levels, to reinforce the rule of law, fight corruption and make this part of Africa an engine of growth for the continent,” the Mauritius leader said.

The Prime Minister pledged his government’s support for Kenya in its bid for a non-permanent seat in the United Nations Security Council for the term 2021 to 2022 at the elections slated for this year.

He said the six trade agreements and MOU’s signed between the two countries would facilitate economic cooperation, investments and trade, and remove non-tariff barriers to trade.

“A number of Mauritius firms are already present in Nairobi and there is a keen interest from manufacturers to establish joint partnerships or pursue single investments in Kenya,” he said.

President Kenyatta welcomed Mauritian investors to take advantage of the many opportunities in Kenya saying the newly signed bilateral frameworks create an even better platform for trade and investment.

“I wish to take this opportunity to welcome Mauritian investors to explore the numerous trade and investment opportunities in Kenya. I assure you of Kenya’s full support, and give my guarantee that you will find a conducive investment environment in Kenya,” President Kenyatta said.

The Kenyan leader encouraged the Mauritius business community to take advantage of his 2017 directive, which enables all Africans to receive visas upon arrival in Kenya. Mauritius citizens don’t need visa to visit Kenya.

President Kenyatta pointed out that his visit to Mauritius is an excellent opportunity to expand the scope of the two countries bilateral cooperation with a view of deepening the people-to-people interactions.