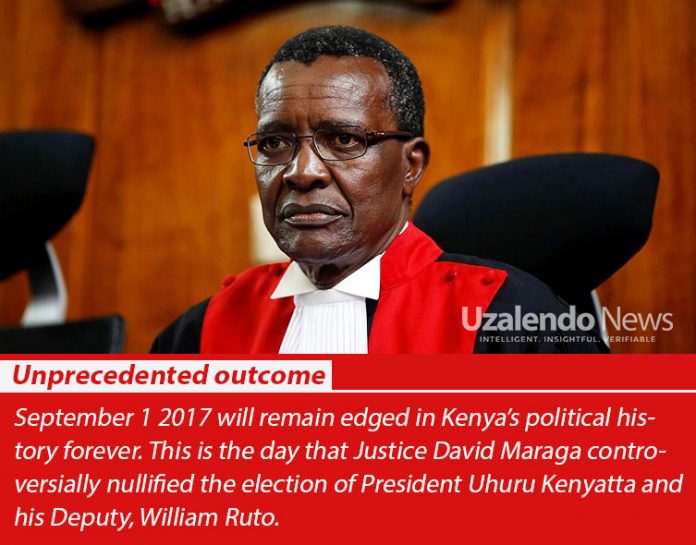 September 1 2017 will remain carved in Kenya’s political history forever. This is the day that Justice David Maraga (read the supreme court) controversially nullified the election of President Uhuru Kenyatta and his Deputy, William Ruto.- By Gerald Gekara

Maraga and his cohort of Supreme Court wazees voted to dismiss the victory of Uhuru without the option of a vote recount. As expected, political temperatures dropped significantly as the ever militant Raila Odinga supporters were given a chance to participate in fresh presidential polls.

The fuming, very angry and cursing Uhuru was left livid by his decision

Tellingly, Uhuru swore to revisit the Wakora Network in the judiciary, and he has done so in style.

The first was the corruption, abuse of office allegations against Deputy, Philomena Mwilu.

She played a key role in the nullification of the Election.  Justice Mwilu has a fudicial relationship with Busia Senator Amos Wako.

For years, its in public domain that the two have family ties. Wako was one of the lawyers for the CORD team during the presidential petition, and Jubilee variously raised eyebrows.

When the chicken came home to roost, Justice Mwilu was dramatically tried in the Daily Nation newspaper, as a top judge facing high-level corruption charges. By the time the DCI and DPP officers arrested her at the Supreme Court offices, her goose had been cooked.

Justice Mwilu is not off the hook yet, as the allegations against her which involved her dealings with Imperial Bank remain intact.

A lot of water has passed under the bridge since..  Including the appointment of Amos Wako to the BBI team. But the vested interest in the judiciary remain intact.

Justice Smoking Wanjala is currently facing an allegation of corruption, filed by one Jared Ongeri.  In the case, Wanjala is accused of soliciting a Sh75 million bribe to influence a decision in the disputed Wajir governor’s seat.

He is known to retain and enjoy cordial relations with former attorney general Githu Muigai. He remains a close confidant of the powerful cable of advisors who oscillate around the president. For that, he appears to have been restituted.

She was an insider during the President Kibaki presidency and played besides the scenes role in fixing political challenges. She is considered by many, a political judge, fiercely pro establishment. Her judgements, her legal opinions other than those that threaten the girl child can be second-guessed.

Jacktone has retired from the Judiciary but his voting patterns in judicial matters was always pro Uhuru. He has since been rewarded with an appointment to the government, the Chairperson of the Energy and Petroleum Regulatory Authority.

Long before Covid-19 came calling, the Judiciary was already underfunded. Maraga variously made noise about the inability to fund key recurrent expenditure obligations.

As a result, the president of the Supreme Court complained that access to judicial services such as litigation was declining despite the availability of an elaborate performance contracting document signed with the parent ministry.

This forced Maraga to call a press conference during which he laid bare his tribulations at the hands of the executive (read President Kenyatta).

It took the intervention of Kenya’s development partners for the judiciary to receive its first tranche of the cash. That was the last the Judiciary received cash from the treasury.

Kenya’s development partners have expressed grave concern over the toppling of relationships between the Judiciary (Maraga) and the Executive. Variously, Kenya has been viewed as a difficult investment ground in view of delay in resolving trade disputes.

The standoff between the two arms of government is seen as a step backwards in advancement of business development in Kenya.

Owing to vested interests by the international community, Kenya government is under pressure to put in place an enabling climate for economic growth, if the country is to maintain its position as the undisputed economic hub in the region.

Imperatively Kenya hosts the UN Nations Headquarters at Gigiri, hosts the regional headquarters of the us diplomatic corps, is a major training ground for the British Army and AMISOM as such a thriving judiciary attracts overlapping interests from these vested quarters.

This means that Maraga may have the silent support of foreign governments out to ensure that their interests are underwritten within an atmosphere of acceptable jurisprudence devoid of political interests and manipulation.