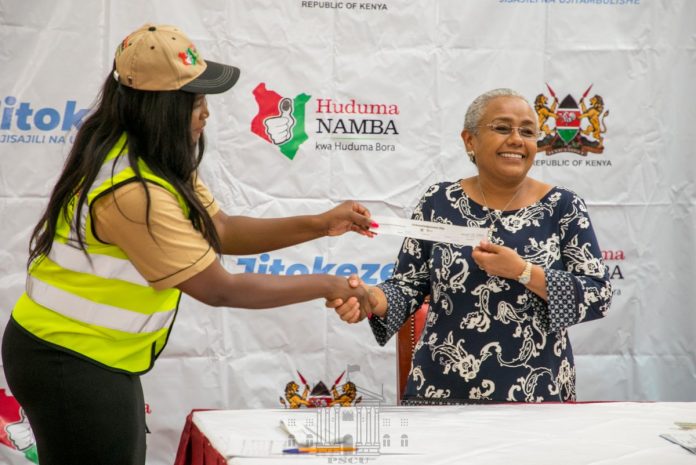 The exercise was conducted at State House, Nairobi by a team of registration clerks from the Ministry of Interior and Coordination of National Government under the supervision of Faith Onyango, the officer-in-charge of the National Integrated Identity Management System (NIIMS) in Nairobi.

President Kenyatta launched the national exercise of issuance of the Huduma Namba last Tuesday at Masii in Machakos County by signing up for his own number and flagging off the registration kits to all the 47 counties.

The NIIMS project seeks to identify all Kenyan residents and registered foreigners through a unique primary identifier using biometric (fingerprints and facials only), demographic and physical details in an exercise that also aims at enhancing national security.

The new Huduma Namba will not invalidate but instead harmonize other national registration processes like the signing up for Identity Cards, National Hospital Insurance Fund (NHIF), National Social Security Fund (NSSF), Birth and Death certificates or the Personal Identification Number (PIN) among others.

Huduma Namba which is also aimed at enhancing the speed and efficiency of service delivery to all residents of Kenya will consolidate the other registration numbers in one digital wallet. The other numbers will become secondary identifiers.

Speaking during the launch of the national exercise, President Kenyatta said NIIMS will not only transform civil registration and data management in the country but also tame corruption and fast-track the implementation of the Big 4 development agenda.