..
Home Business Kenya Has Breached Its Public Debt Ceiling – How It Got There... 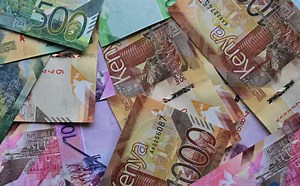 Kenya’s newly elected president, William Ruto, has earned more legal space to borrow for his grandiose economic plan after parliament recently raised the country’s public debt ceiling to KSh10 trillion (US$100 billion). The new administration says the country is broke but Kenya is already living beyond its means and the World Bank has warned of a high risk of debt default. We asked Odongo Kodongo, a finance scholar, to explain the debt ceiling and why Kenya needs to pay more attention to it.

What is the debt ceiling?

First let’s understand what public debt is. Article 214(2) of the constitution of Kenya defines public debt as all financial obligations arising from loans raised or guaranteed and securities issued or guaranteed by the national government. Governments need to borrow money to pay their bills when they cannot fund all their activities using its revenues alone.

Section 50(2) of the Act caps national government borrowing to a limit set by the national assembly. This clause was recently amended to allow the government to exceed the limit under certain circumstances. The circumstances include depreciation of the shilling, material balance of payments imbalances, or fiscal disruptions caused by wars, health pandemics, or national disasters.

My concern is that the flexibility introduced by these new amendments can be abused by an irresponsible government.

But all is not lost. Before exploiting this flexibility, the Treasury cabinet secretary must explain the circumstances to the national assembly and provide a time-bound plan for remedying the breach of the ceiling. Thus, all would be well if the national assembly cannot be unduly influenced by the executive.

How much is Kenya’s public debt ceiling?

National government finances are governed by the Public Finance Management (National Government) Regulations of 2015, which set the ceiling at 50% of the present value of GDP. The national Treasury has recently proposed to change the limit to 55%.

The proposed change translates to a debt ceiling of about KSh8.579 trillion for 2022. This figure is calculated from the official forecast for 2021 economic production of KSh12.1 trillion and its projected growth rate of 5.9% during 2022.

The high debt usage has driven the cost of annual debt servicing to almost 54% of domestic revenues. This is an increment of 14% compared to 2020 when the ratio was about 40%.

What are the recent warning signs?

Given the high proportion of revenues that debt servicing gobbles up, the government appears to be borrowing beyond the country’s means. Increasingly, concerns are also being raised about the shifting composition of public debt in favour of external debt (lenders outside Kenya.) External debt burden is usually heavier because it depletes the country of foreign exchange reserves. This may trigger a fall in the value of the shilling.

In real terms, the external debt burden has worsened due to the persistent fall in the value of the Kenya shilling and the economic slump that followed the COVID-19 restrictions.

How did Kenya get to this point?

Kenya has not witnessed such high levels of indebtedness in recent history. The country’s growing debt burden has been attributed to many causes. First, official sources point to high infrastructure spending, increased recurrent expenditures (payment of regular expenses like public wages and interest on loans), revenue collection shortfalls, and constraints in institutional capacity for public expenditure management.

Second, increased reliance on commercial external debt with short tenors (debt that must be repaid quickly) has put pressure on government to refinance at short intervals and on worsening terms. In other words, an existing debt must be replaced with new debt at a higher interest rate. The higher rate signals that lenders now have more doubts about getting their money back.

In June this year, the government had to abandon a planned KSh115 billion Eurobond issuance because yields had increased beyond 12.5%, meaning that it would have been too expensive to repay.

Third, the government has blamed unanticipated economic shocks such as drought and COVID-19. Fourth, critics have cited financial impropriety as another possible reason. They point out that the growth in infrastructure and welfare spending does not match the growth in debt since 2013 and that there are no proper records of debt spending.

Why does the debt ceiling matter?

Ceilings are imposed to ensure that countries employ public debt sustainably. Debt sustainability is about the ability of a country’s current and expected future income to cover debt servicing costs.

A breach of the debt ceiling signals the possibility that the country’s debt could be excessive and unsustainable.

Public debt is regarded as excessive if it substantially reduces the amount of goods and services available to future generations, and if the country could lose or only have reduced access to financing.

Excessive public debt has several economic consequences. First, servicing the debt reduces resources available for funding the government’s other programmes.
Second, it means government cannot afford to stimulate economic activity by, for example, lowering taxes, or to provide welfare support to citizens. An example of welfare support is cash payments to dependants of dead retirees.

Third, government borrowing essentially transfers wealth from the poor, who must pay increased taxes for debt repayment, to the rich, who lend money to the government and earn interest from it. Excessive public debt therefore widens the welfare divide between the rich and the poor.

Finally, one of the most painful consequences of excessive debt is possible default as has recently happened to Argentina and Zambia. Debt default could result in loss of sovereignty as creditors demand austerity measures (budget cuts) as part of any debt restructuring deal. Kenya needs to draw some lessons from such undesirable cases.