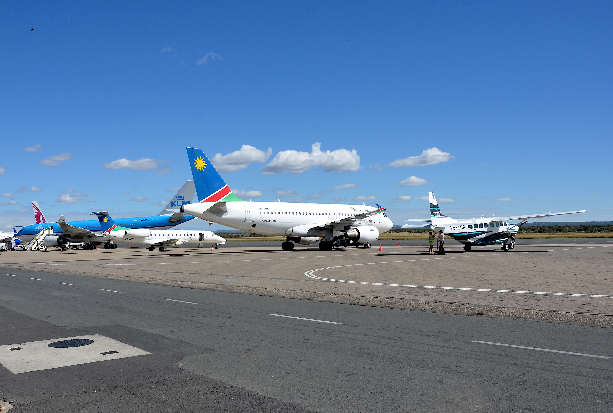 President Uhuru Kenyatta and his Namibian counterpart President Hage Geingob today held bilateral talks where they agreed to increase the people to people interaction between Kenya and Namibia in order to increase trade between the two countries.

The leaders said they will soon implement a five year visa plan for Kenyan business people interested in trading in Namibia. The plan is expected to eventually lead to a visa free regime between the two countries.

President Kenyatta, who is in Namibia for a State Visit, said Kenya is keen to export more products including its famous tea and coffee to the Southern Africa nation.

He said the sizeable Kenyan professional and business diaspora in Namibia has already created a foundation for stronger ties between the two nations.

President Kenyatta, who spoke at State House, Windhoek, said the bilateral relations between Kenya and Namibia are founded on shared values and common aspirations.

“We have an opportunity today to review the existing areas of cooperation and chart the way towards a status of strategic cooperation,” said President Kenyatta.

He said Kenya will continue supporting Namibia with expertise in various fields including health, engineering, architecture and governance. The President said Kenya will support Namibia in setting up of cooperatives to make the agricultural and fishing sectors more productive.

In reciprocation, Namibia will support Kenya in developing its fisheries sector so that the blue economy can contribute more to Kenya’s economy.

“We need closer cooperation with Namibia in the fishing sector. We need partnerships to exploit the Kenyan fisheries resources because currently we get almost nothing from our fish in the sea,” said President Kenyatta.

He said the two countries have already agreed to link the ports of Mombasa and Walvis Bay as Kenya embarks on programs to expand its ports.

The Kenyan leader said the country will continue strengthening its defence and security cooperation with Namibia.

On his part, President Geingob said talks are at an advanced stage to start direct flights between Nairobi and Windhoek.

“We hope for direct flights from Nairobi to Windhoek and then we can do a lot more in trade and investment,” said President Geingob.

He said the free movement of people will contribute to increased trade and deepen the strong historical ties between the two nations.

President Geingob said Namibia is keen to work more closely with Kenya in manufacturing and value addition especially in the minerals sector.

“Namibia is known for its beef, fish, diamonds and marble stones but we send the marble stones to foreign countries and we buy them back when they are polished,” said President Geingob.

He said Kenya is a leader in digital innovation and Namibia can learn a lot from the East African nation.

The two Presidents later witnessed the signing of an agreement on diplomatic services between Kenya and Namibia.

On arrival at State House in the morning President Kenyatta was received by his host and was accorded a 21 gun salute after which he inspected a parade by the Namibian Defence Force (NDF).