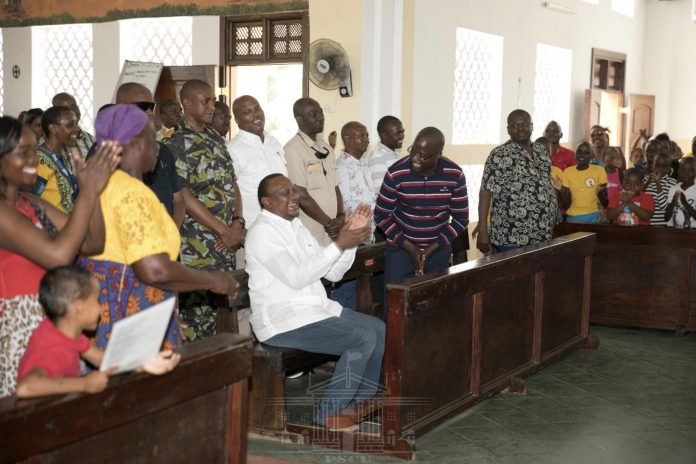 President Uhuru Kenyatta has today called on all Kenyans to come together in unity saying the country needs all its people to develop.

The President, who spoke at St Anthony Catholic Cathedral in Malindi where he joined worshippers for Sunday mass, said every Kenyan has a role to play in nation building.

“All of us, big or small, have a role (in nation building). We have the responsibility to use our positions to assist others. That’s the language of all of us in the Government of the Republic of Kenya,” the President said.

“This country needs all of us. And if we come together and everybody carries out their responsibilities wherever they are, I have no doubt that in a short time we will have a country that each one of us is proud of. That’s our objective,” he added.

The President said he was in the region to inspect ongoing development projects in Kilifi and Lamu Counties among them the roads from Malindi to Sala Gate and Garsen to Lamu as well as the Lamu Port.

“And if security and jobs for our youth are tied together then that’s wealth for our country. However, all these won’t be possible if we are not united,” he added.

The President warned against divisions and negative ethnicity saying the days of dividing Kenyans along tribal lines are long gone.

He urged Kenyans to love one another and to continue living with each other in peace and harmony.

The sermon was delivered by Father Joseph Ngala who called on Kenyans to cultivate a culture of praying for and supporting their leaders saying that’s how to build a happy nation.

The President, who is on a working tour of the Coast region, was accompanied by Chief of Defence Forces Gen Samson Mwathethe and Coast Regional Coordinator John Elungata.