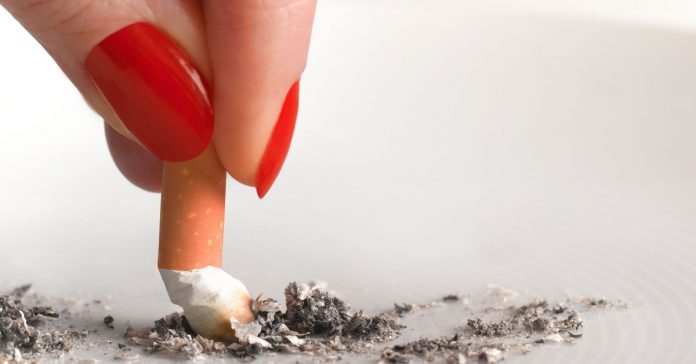 We know that quitting smoking is an excellent way to reduce your risk of developing lung cancer. But until now, experts weren’t quite sure why this was the case. Our latest research has uncovered that in people who quit smoking, the body actually replenishes the airways with normal, non-cancerous cells that help protect the lungs, in turn reducing their risk of getting cancer.

Cancer develops when a single rogue cell acquires genetic changes, called mutations, that instruct that cell to ignore all the normal constraints on its growth, causing it to rapidly replicate out of control. Throughout our lives, all of our cells acquire mutations at a steady rate – around 20-50 mutations per cell per year. Thankfully, the vast majority of these mutations are entirely harmless and don’t affect our cells in any measurable way.

But occasionally, a mutation will land in the wrong gene in the wrong cell and push the cell along the path to cancer. We call these genetic changes “driver mutations”. For the cell to become a full-blown cancer cell, it would probably need five to ten or more of these driver mutations.

Thanks to advances in DNA sequencing technology, we’re now able to study all 3 billion bases of DNA that make up a cell’s genetic blueprint (called a genome). By sequencing the DNA of lung cancer cells in smokers and never-smokers, we know that smoking increases the number of mutations.

The binding of tobacco carcinogens to DNA is influenced by their chemical properties, meaning that certain types of mutation are more likely to occur than other types. For tobacco, this results in a distinctive “signature” of mutations appearing in the genome, which is unlike other causes of DNA damage.

READ  State pumps Ksh 2.1 Billion for Kisumu roads ahead of a global summit

Our team has been interested in the very earliest stages of lung cancer development. Specifically, we’re trying to understand what happens to normal cells when they’re exposed to tobacco smoke.

To study this, we developed methods of isolating single normal cells from small biopsies of a patient’s airways, then growing these cells in an incubator to obtain enough DNA for sequencing. We then analysed the genomes of 632 cells from 16 study participants including four never-smokers, six ex-smokers and three current smokers (all middle-aged or older) as well as three children.

Among the never-smokers, we found that the number of cell mutations increased steadily with age. So, by the time someone is 60 years old, each normal lung cell will contain about 1,000-1,500 mutations. These mutations are caused by the normal wear-and-tear of life, the same type of mutations we see in other organs in the body. Only about 5% of cells in never-smokers were found to have any driver mutations.

But the picture was very different in current smokers. We found that each lung cell on average carried an extra 5,000 mutations above what we would expect for a never-smoker of the same age. Even more striking was that the variation from cell to cell also dramatically increased in smokers.

Some individual cells had 10,000-15,000 mutations – ten times more mutations than we would expect if the person hadn’t smoked. These extra mutations had the signature we would expect from the chemicals in tobacco smoke, confirming that they can be directly attributed to cigarettes.

Alongside an increase in the total number of mutations, we also saw a substantial increase in the number of driver mutations. More than a quarter of lung cells in all the current smokers we studied had at least one drive mutation. Some even had two or three. Given that five to ten of these kind of mutations can caused cancer, it’s clear that many normal lung cells in these middle-aged or older smokers will likely become cancerous.

Never too late to quit

Our most exciting finding was in the people who had quit smoking. We found ex-smokers had two groups of cells. One group had the thousands of extra mutations seen in current smokers, but the other group were essentially normal. The group of normal cells had the same number of mutations as we would expect to see in the cells of someone who had never smoked.

This near normal group of cells was four times larger in ex-smokers than current smokers. This suggests that these cells increase to replenish the lining of airways after someone stops smoking. We could see this expansion of near-normal cells even in ex-smokers who had smoked a packet of cigarettes every day for more than 40 years.

Now, we know the reason our risk of cancer decreases so significantly is because the body replenishes the airways with cells that are essentially normal. The next step will be to identify how this group of cells manages to avoid damage from exposure to cigarette smoke – and how we might stimulate them to recover even more.

One potential explanation – suggested by past work in mouse models – is that there’s a group of stem cells buried deep in the glands that produce the mucus secreted by the airways. This location would naturally be better protected from tobacco smoke than the surface of airways.

For now, our research reiterates that stopping smoking – at any age – not only slows the accumulation of further damage, but it can reawaken cells that haven’t been damaged by past lifestyle choices.

State pumps Ksh 2.1 Billion for Kisumu roads ahead of a global summit