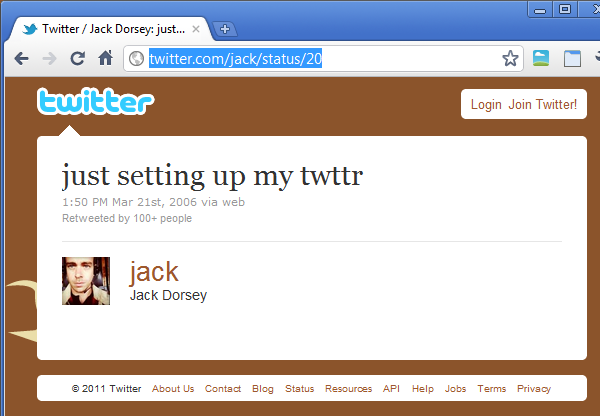 Twitter founder Jack Dorsey’s first ever tweet has been sold for the equivalent of $2.9m (Ksh. 318.5 Million) to a Malaysia-based businessman.

The tweet, which said “just setting up my twttr,” was first published on March 21, 2006 and was auctioned off by Mr Dorsey for charity.

The tweet was bought using the ether cryptocurrency, a rival to bitcoin.

It was sold as a nonfungible token (NFT) on Monday to Mr Estavi, the chief executive of technology firm Bridge Oracle.

An NFT is a unique digital certificate that states who owns a photo, video or other form of online media. Each NFT is unique and acts as a collector’s item that can’t be duplicated, making them rare by design.

NFTs have become hugely popular this year, with expensive digital artwork also being sold this way.

Mr Dorsey said he would convert the proceeds to bitcoin and then donate them to the Give Directly’s Africa Response fund.

Mr Dorsey’s brief tweet was sold via an auction on an online platform called Valuables, which is owned by the US-based company Cent.

Under the platform’s rules, Mr Dorsey receives 95% of the proceeds of the primary sale, while Cent receives 5%.

But the post will remain publicly available on Twitter even after it has been auctioned off. Within minutes of the auction bids reached more than $88,000.

As the buyer, Mr Estavi will receive a certificate, digitally signed and verified by Mr Dorsey, as well as the metadata of the original tweet. The data will include information such as the time the tweet was posted and its text contents.

Social media experts predict the sale of tweets and other online posts will become more popular.

“We live in an age where celebrities, musicians and influencers have more than fans, they have stans, and they will want to own a piece of their favourite stars,” said Cathy Hackl, founder of technology consultancy Futures Intelligence Group.

“Just like people buy physical memorabilia, they will buy their tweets, posts, and snaps because they want to feel close to that star”.

Earlier this month, the first digital-only art auction was held by Christie’s auction house and netted $69m for the artist Beeple.

Beeple – real name Mike Winkelmann – creates a new piece of digital art every day, and was selling the first 5,000 days (13 years) of his work.

“This is a watershed moment and proof of concept for digital art, which has been dogged by questions of commercial value, authenticity, ownership and scarcity,” said Rob Anders, boss of Israel-based digital art platform Niio.

Mr Estavi and Bridge Oracle didn’t immediately respond to requests for comment when contacted by the BBC.

Reasons You Should Fall In Love With These Kenyan Actresses

Khaby Lame Is Now The Most Followed TikTok Star