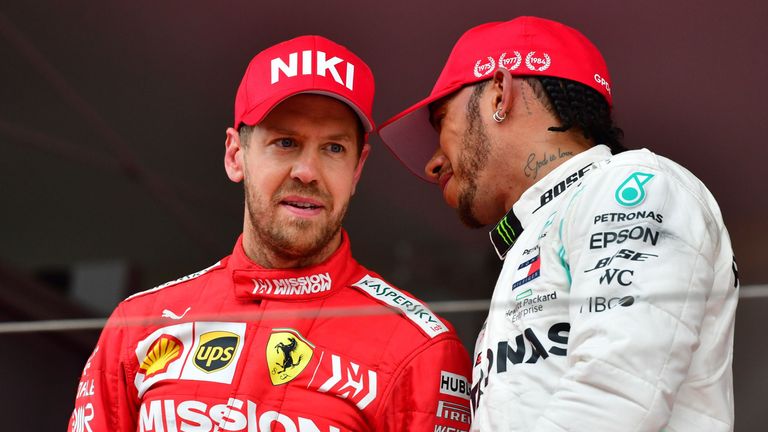 Vettel has announced he is leaving Ferrari at the end of the 2020 season
Move will start a huge driver shake-up with Carlos Sainz likely to replace him
The German is firmly on Mercedes’ radar as an alternative to Valtteri Bottas
Mercedes are considering partnering Sebastian Vettel with Lewis Hamilton in what would be the most decorated line-up in F1 history.
The possibility of the pair, who have 10 championship titles combined, racing together came about after Tuesday’s announcement that Vettel would be leaving Ferrari at the end of the year, starting a huge driver shake-up.

There is even the remote chance of Hamilton seizing on the flux to land a seat at Ferrari. However, it is far more likely that Vettel’s place will be taken by Carlos Sainz of McLaren, with Daniel Ricciardo then going from Renault to replace the Spaniard.

nd while it is unclear for the moment whether Vettel, 32, will retire at the end of the year or seek a final contract elsewhere, he is firmly on Mercedes’ radar as an alternative to Valtteri Bottas.

‘Sebastian is a great driver, a major personality and an asset to any Formula One team,’ team principal Toto Wolff said on Tuesday. ‘When looking into the future, our first loyalty lies with the current Mercedes drivers but naturally, we must take this development into consideration.’

Vettel will leave after contract talks broke down over the last few weeks. He was pushed rather than jumped — or squeezed out, at best. He fell victim to an internal review that decided he was surplus to requirements, with 22-year-old Monegasque Charles Leclerc the undisputed main man at the Scuderia.
‘They no longer believed in Sebastian,’ said one Italian source close to the scene.

It is understood that negotiations did not even get as far as discussing money before being called off.
Vettel then leaked the news in the German media on Monday night, which forced Ferrari into issuing official confirmation on Tuesday morning.

Team principal Mattia Binotto said: ‘The decision was not easy to reach, given Sebastian’s worth as a driver and a person. The time had come to go our separate ways in order to reach our respective objectives.’
Vettel admitted there was ‘no longer a common desire’ to keep the relationship going. He added: ‘In order to get the best possible results, it’s vital for all parties to work in harmony.’

He will see out this season, if it restarts, in the red overalls he has worn since joining the Scuderia in 2015 in the hope of emulating his boyhood hero Michael Schumacher in championship success.
Despite 14 wins, the dream failed to materialise, his performances increasingly scratchy compared to the serenity of his titles in a dominant Red Bull between 2010 and 2013. The errors mounted up, his confidence seemingly shot. He arguably should have won the title in 2017 and 2018. Hamilton would have done had he been in the Ferrari.

And then arrived the sophomore Leclerc, who last season stripped the German of his primacy in the team. Vettel was clearly feeling the pressure that falls on a Ferrari driver in poor form. He was at a point of no return.
He may have other options for 2021. As well as Mercedes, there is interest from Racing Point/Aston Martin. Renault are another possibility. McLaren less so — his name is under Ricciardo’s on the list.

As for Hamilton and the Ferrari link, the thread is thin. The Scuderia have signalled their intention to back Leclerc by signing him up over the winter on a five-year contract that retains him until 2024. Unimaginatively, they want Sainz, decent but not a star driver, as a docile No 2 in the style of Rubens Barrichello.

Sainz will come relatively cheap at a salary less than £10million a year, minimally a third of what they would have to pay Hamilton.
The six-time world champion’s Mercedes contract is due for renewal at the end of the season, but talks have paused while coronavirus lurks.
It may be that he will yet spring a surprise by ringing Ferrari chairman John Elkann, and press to make the switch. The two men have been in dialogue before. But Hamilton seems content, which is a shame because a move to Maranello would be the breath of fresh air the sport needs.
Ricciardo’s expected move from Renault might open the way for their double world champion Fernando Alonso to return from his Formula One break. He is desperate to come back.
As for Vettel, he is taking time, he said, to reflect on his next steps in life.