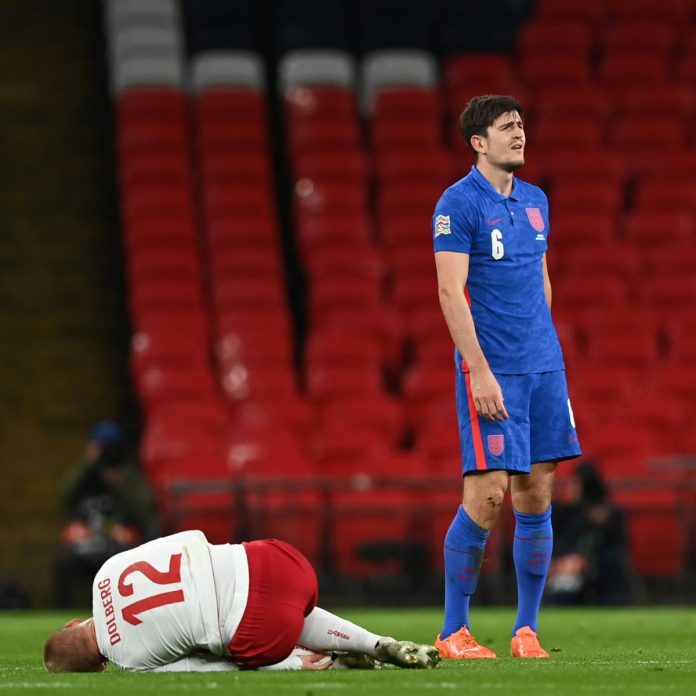 Harry Maguire’s miserable start to the season continued with a red card as England had two men sent off for the first time in their Nations League defeat by Denmark.

Manchester United’s captain suffered a 31-minute nightmare, shown a yellow card for a reckless early challenge on Yussuf Poulsen and then dismissed by Spanish referee Jesus Gil Manzano after he brought down Kasper Dolberg trying to retrieve his own poor touch.

England’s night got worse four minutes later when Christian Eriksen scored his 34th goal for Denmark on his 100th appearance after Kyle Walker was harshly adjudged to have fouled Thomas Delaney.

In a low-key affair, England had their moments and it took a magnificent save from Kasper Schmeichel to claw away Mason Mount’s close-range header as Denmark closed out the win

Scotland made it eight games unbeaten – their best run in 32 years – as they resisted intense second-half pressure for a hard-fought Nations League win over the Czech Republic at Hampden.

Ryan Fraser’s sixth-minute finish gave the hosts a lead they clung on to.

Steve Clarke’s men defended resolutely – and were grateful for an incredible Tomas Soucek miss – to go four points clear at the top of Group B.

Substitute Jonny Williams grabbed a late victory for a depleted Wales side in Bulgaria which keeps them top of their Nations League group.

With leading players such as Gareth Bale and Aaron Ramsey missing through injury, their younger understudies showed signs of promise but lacked a cutting edge for much of the game.

It was a dramatic way to snatch victory and, with the decisive cross coming from Neco Williams, there were echoes of Wales’ win over Bulgaria in last month’s reverse fixture – when the

Liverpool teenager had scored an injury-time winner as a substitute.

A much-changed Northern Ireland suffered their third consecutive Nations League defeat as a Stuart Dallas own goal gave Norway victory in Oslo. The Leeds United winger deflected a corner into his own net in the 67th minute.

Manager Ian Baraclough made 10 changes to the side that lost to Austria on Sunday and they produced a solid, hard-working display.

It extends a poor run in the Nations League for Northern Ireland, who have now picked up just one point from eight games since the competition began two years ago.