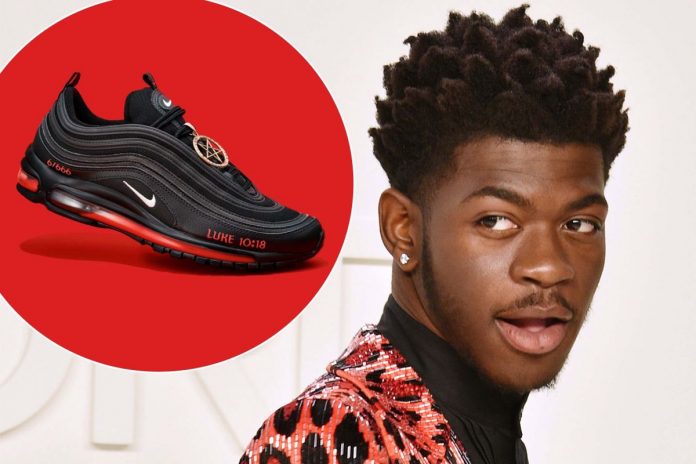 Nike has filed a federal trademark infringement lawsuit against the company that released a controversial customized version of its sneakers in collaboration with rapper Lil Nas X. – By Stephanie Mwangi.

The old town road singer worked with MSCHF to release Satanshoes on Monday, the sneakers were modified into Nike Air Max97s decorated with a pentagram pendant and a reference to Luke 10.18 a bible verse about Satan’s fall from heaven.

MSCHF  is a company that is known for creating controversial and viral products ,confirmed on Sunday that the shoes contained a drop of human blood inside the sole drawn from members of the MSCHF team .

All 666 pairs of the modified Nikes sold out shortly after they went on sale on Monday, Nike filed a lawsuit and Lil Nas was not named as a defendant after many people said they believe he was involved with the shoes even though a statement was released over the weekend saying he had nothing to do with them.

The lawsuit argues that Nike must maintain control over its brand by setting the record straight  about what products bear its distinctive swoosh logo.

The release of the Satan shoes concedes with Lil Nas’s latest single Montero call me by your name, and its music video shows Lil Nas being seduced out of the Garden of Eden, falls into hell and gives the devil a lap dance.