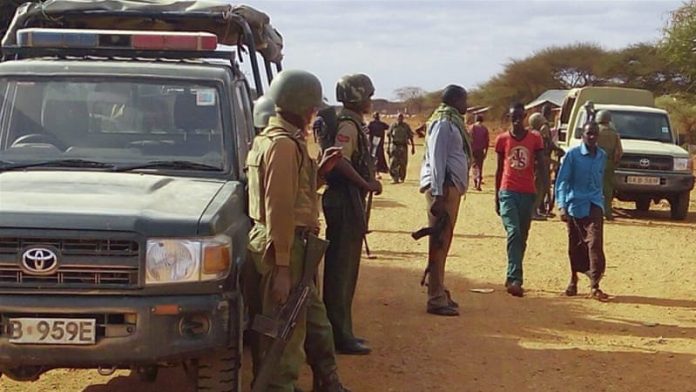 Yesterday, Suspected Al- Shabaab militants detonated an explosive killing eight officers in Wajir. The police has released an update on the victims and survivors of the attack

” On 15/06/2019 at around 1130 hours, information received from assistant chief Kotulo Wajir location MR. ISSACK SHEIKH OSMAN confirms that a patrol team which was on vehicle patrol while boarding APS motor vehicle GKB 641T Toyota Landcruiser from Khorof Haraar to Konton area of Wajir East Sub County under the command of IP (APS) ADOW BURALE, were hit by IED and the following seven fatalities are currently at Wajir general hospital morgue.

The following survived with injuries and are currently admitted at Wajir County referral hospital:-

The following officers are not accounted for:-

There are plans that KDF will airlift the bodies of three non locals to Nairobi where, Nairobi team should facilitate by attending their post mortem.

For the bodies of the locals, post mortem will be conducted tomorrow morning before bodies are released for burial according to Muslim tradition.

Due to poor accecibility in the area where it is suspected that IED’S are planted in major roads, the scene was not documented.