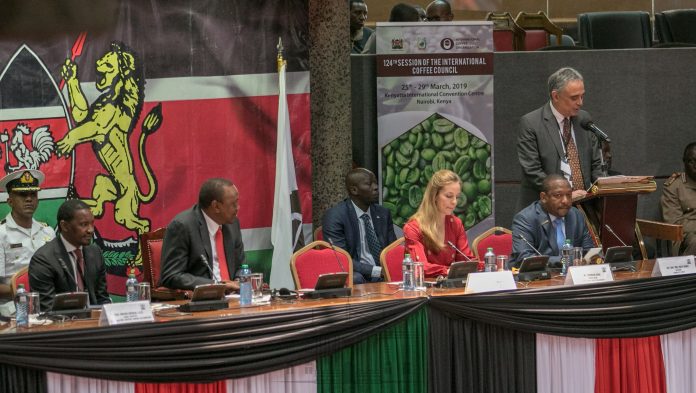 Beginning July, coffee farmers from across the country will be able to access payments from a Shs 3 billion cherry advance revolving fund, a move aimed at resolving the problem of delays in coffee payment cycles.

“All coffee farmers across the country will be able to access the cherry advance at a modest interest rate of three per cent,” said the President when he opened the  124th session of the International Coffee Council at the Kenyatta International Convention Centre (KICC).

The coffee meeting is being attended by delegates from coffee growing and consuming countries from across the world.

The President announced that under a new regulatory framework, the coffee sector will be liberalized to usher in a new era of direct marketing by co-operative societies.

Other interventions announced by President Kenyatta include a requirement for all coffee co-operatives to present  audited annual reports to the agriculture cabinet secretary within six months of every calendar year, with a simultaneous release to the entire membership of the respective society and the public.

“The inaugural audits under the forthcoming enhanced regulatory framework will cover the calendar year 2019, and shall be submitted by all co-operatives on or before 31 December, 2019,” said the Head of State.

The President said the new interventions are in line with the aspirations of members of co-operative societies and are aimed at having well managed, financially stable and efficient saccos  that are able to deliver on their mandate of enhancing benefits accruing to individual members through strengthened resource mobilization and economies of scale.

“To protect the sweat of the brow of coffee farmers, my administration has embarked on a programme to entrench the principles of good corporate governance within the internal management of co-operatives,” the President said

Another key intervention announced by President Kenyatta include an ambitious rehabilitation of 500 pulping factories in 31 coffee growing counties, the rehabilitation of planting materials and more investments in research and extension services.

President Kenyatta said the reforms he announced today are designed to boost production, reduce the cost of processing and milling as well as transaction costs at the auction market.

He said the new institutional, legal and support services interventions are intended to reverse the negative trends facing the coffee sub-sector and safeguard the future of coffee farming in the country.

President Kenyatta said Kenya produces some of the best coffee in the world but regretted that the premium prices the Kenyan coffee fetches in the global market does not trickle down to the farmer.

“Paradoxically, these premium prices do not trickle down to the farmers,who by and large, are small-scale producers. This phenomenon, though not unique to Kenya, represents the single greatest challenge to the continued prominence of the coffee industry,” he said.

Besides encouraging the youth and women to participate in the coffee value chain to both increase consumption and create jobs, President Kenyatta said  the government is also aggressively marketing Kenyan coffee brands to the international markets.

“As part of this strategy, we are aggressively marketing globally to increase Kenya’s market shares in Europe, the US and in the emerging Asian markets,” he said as he expressed optimism that the status of coffee in Kenya is strong and its future outlook remains positive.