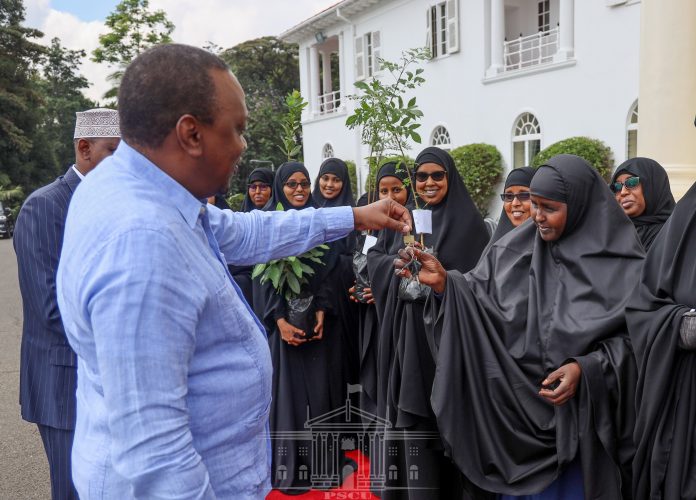 President Uhuru Kenyatta has challenged Kenyan women to take the lead in nation-building saying women, just like their male counterparts, have the potential to steer the country’s development agenda.

The President, who spoke today at State House Nairobi while donating a bus to Hafsa Bint Siirin Centre from Garissa County, encouraged women to play a more active role in Kenya’s push to attain prosperity, peace and stability.

“Actually you have even a greater role because in formative years of any child be they male or female, you are at the centre of developing, of growing and of instructing that child. Before you hand them over to the world, their formative years are in your hands,” the President said.

Hafsa Bint Siirin Centre is an Islamic women educational and empowerment institution based in Garissa town. The centre provides education and empowerment to women, orphans, vulnerable girls, persons with disability and senior citizens.

While handing over the bus donation to the women who were led by the centre’s founder Ms Hawa Kalba Gure, the Head of State encouraged them to continue working for the empowerment of women and the girl child.

“So ours is to support this kind of initiative. Ours is to encourage you. Ours is to say we are proud of what you are doing to empower your fellow citizens,” the Head of State said.

He underscored the importance of women empowerment saying mothers give their children a firm foundation from which they become meaningful contributors to the development and economic growth of the country.

The President, who also donated indigenous tree seedlings to the group, pointed out that shutting out women from the core of national development means shutting out half of the country’s human capital.

“We cannot allow that to happen. We want women to be at the centre of development and nation building like their male counterparts,” he said.

National Assembly Majority Leader Aden Duale who accompanied the women to State House thanked the President for the donation saying the bus will enhance the operations of the group. Mr Duale is also the Garissa Township MP.