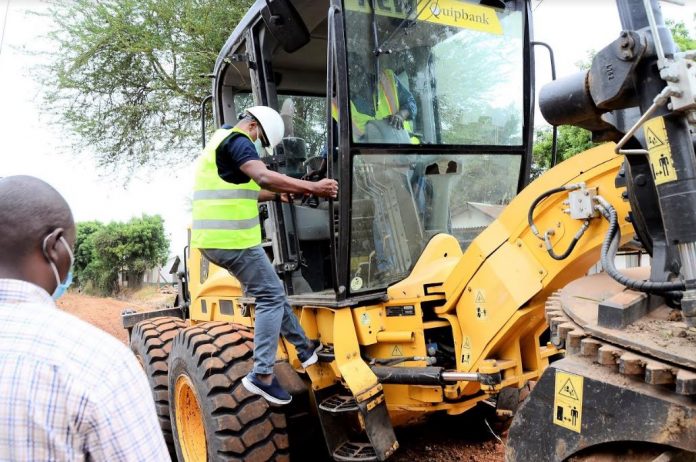 As he boarded a bulldozer at Mariakani town to launch the Sh60 million upgrading of the Mariseco by-pass in Mariakani, Kilifi Governor Amason Kingi had opened the door for the major roads upgrading activities within the county.  – By Ramadhan Kambi.

The move is aimed at easing transport and open up both rural and urban towns for investors to invest.

The county has tarmackeded roads in Malindi town, Kilifi, and is currently carrying out tarmacking of Mtwapa, Mariakani, and Mambrui town roads.

The department of roads, infrastructure and transport, say that the devolved government has so far used more than Sh2billion in tarmacking of roads in its major towns, opening up an opportunity for trade and development.

According to the report, in Mtwapa for example, the county will spend Sh45 million to begin the first phase of tarmacking 1.5km out of the three kilometers Jumba ruins road which has been in a bad state for a long

In this financial year, the county has spent more than Sh500 million in projects which are ongoing and new ones which once complete, will open up the areas for development.

Speaking after commissioning the Mamburui -Angels road, Kilifi Deputy Governor Gideon Saburi, said the recently launched roads projects are an addition to the already completed projects in Malindi and Kilifi towns, and a section of Mtwapa. These towns are a major tourism destinations.

Eng. Saburi said the devolved government is committed to developing the infrastructure to boost the economic livelihood of the communities and also instill investor confidence in the county.

“The Mtwapa road for example is one of the ones in our county especially in its locality. This road had taken long to be implemented but now our Governor Amason Kingi decided to do it in three phases,” Saburi said.

Among those present during the launch of the Mamburui -Angels Bay road was Kilifi roads executive Josephat Mwatela, chief officer Kenneth Kazungu, Trade and Tourism executive Nahida Mohamed among other county officials.

Saburi promised to ensure the road is fully tarmacked in the next financial year and also warned contractors doing shoddy government projects that they will be blacklisted.

“I also would like to warn contractors doing shoddy jobs that they will be blacklisted. We want to these projects completed in time and that is why any person doing shoddy job or not completing it within the set time frame will no longer get any government jobs in future because we shall blacklist them,” he said.