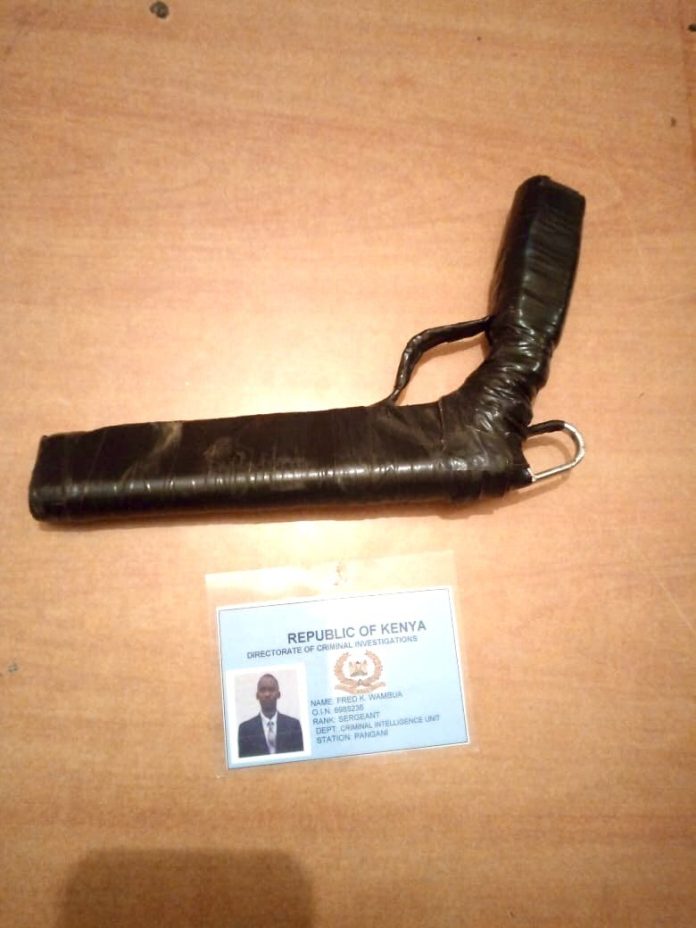 Last night, after raiding an apartment at Kihunguro in Ruiru, Kiambu County, two suspects posing as detectives were apprehended.

The two who raided a house at Elim Shepherd apartment at around one in the morning had identified themselves as detectives based at Pangani police station.

“The swift response by the Ruiru-based officers caught the thugs by surprise as one of them attempted to fly from the 3rd floor of the apartment only to land on the apartment’s floor with a heavy thud seriously injuring his head,” said DCI.

“Minutes, after the residents made the all-important call, the deafening rumbling sound of the all-terrain police land cruiser, was heard groaning from a Kilometre away vrooooom! ga ga gaga ga! as its wheels crushed against the rocky road leading to the apartment with unrestrained enthusiasm. The roaring sound of the recently acquired beast coupled by its head lights on full beam seemed to have terrified the thugs, who looked for an escape route with little success,” DCI added.

According to DCI, his beleaguered accomplice, who had no chance against the two athletically built, dark, lanky, and menacing new constables, instantly gave up after turning up his phony pistol and police commission document.

As he informed control over the police radio that the two had been successfully apprehended, the corporal in charge of the operation relaxed in the front passenger seat and saw the excellent work of his officers.

“The suspect who sustained serious injuries was rushed to Ruiru Level 4 hospital  for treatment as his accomplice identified as Robert Gitonga became a guest of the State at Ruirupolice station,” said DCI.