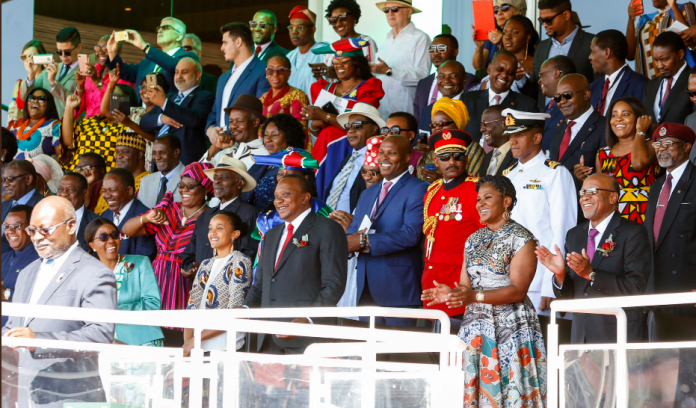 President Uhuru Kenyatta has challenged African nations to create more opportunities for the youth to flourish.

“I call upon African leaders to pay particular attention to the dreams and aspirations of our young people by creating a conducive environment for them to flourish. They are the reason our forefathers fought long and hard for self determination and they are the reason our free nations exist today,” said President Kenyatta.

The Kenyan leader was the Chief Guest at the ceremony where he was conferred Namibia’s highest award of honour, the Grand Master of the Order of the Most Ancient Welwitschia Mirabilis, by his host President Hage Geingob for his contribution to democracy and good governance.

President Kenyatta challenged Africans to work harder to unlock the continent’s economic potential noting that Africa has already charted a roadmap through the African Union (AU) Agenda 2063 to accelerate progress towards the “Africa we want”.

He said Kenya remains committed to continue working closely with Namibia and other African nations to realise the goal of a peaceful and prosperous future for all.

“Borders must never be used as an excuse for us to retract back and forget the African spirit of Ubuntu. We remain stronger together,” said President Kenyatta.

The President said Kenya and Namibia enjoy close ties which started in the days the South West African People’s Organisation (SWAPO) fought hard to free the nation from the yoke of the apartheid regime.

Kenya also played a major role in ensuring that Namibia had a stable foundation when a large contingent of Kenyan forces, who were part of the United Nations Transition Assistance Group (UNTAG), remained behind after the end of the peace keeping mission.

The Government of Kenya funded the extended stay of its contingent who were tasked to train the Namibia Defence Forces and ensure stability of the country.

“Our shared values and aspirations and our enduring strong historical bonds of brotherhood have continued to grow from strength to strength,” said President Kenyatta.

President Kenyatta commended Namibia for its commitment to democracy, good governance and adherence to a rules based international system.

“Kenya continues to pursue the agenda of peace and security regionally and globally and believes that the absence of stability threatens our shared aspirations for promoting the well being of our community of Nations,” said President Kenyatta.

President Geingob thanked President Kenyatta for honouring his invitation to be the Chief Guest at the country’s independence day fete.

He said Namibia will always be grateful to the people of Kenya for their contribution to Namibia’s independence.

President Kenyatta, who is in Namibia for a State Visit, will meet Kenyans living in Windhoek. Namibia hosts a sizeable number of Kenyan professionals including medical experts, engineers and architects.

On Friday, President Kenyatta will be formally received at State House, Windhoek, by President Geingob.

The Kenyan leader will be accorded a 21 Gun Salute after which he will hold talks with his host. The two leaders will later chair bilateral talks that will be attended by high-level delegations from both countries.

On Saturday, President Kenyatta is scheduled to travel to Walvis Bay where he is expected to tour the country’s major seaport, NAMPORT, and later tour a number of factories.

This is the second time President Kenyatta is visiting Namibia, the first time being when he attended the inauguration of President Geingob in 2015.

In October last year, President Geingob paid Kenya a three-day visit during which he was the chief guest at the Mashujaa Day celebrations held at Bukhungu Stadium in Kakamega County.