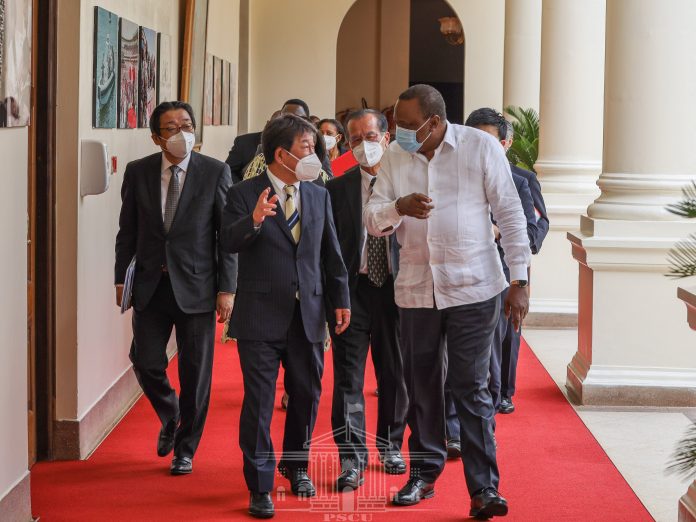 During the courtesy call, Mr Motegi, who is in the country on a two-day visit, expressed Japan’s continued commitment to supporting Kenya’s development programs especially key infrastructure projects.

The Foreign Affairs Minister singled out the ongoing expansion of Mombasa Port and the development of the Dongo Kundu Special Economic Zone (SEZ) as some of the projects that his government is keen on seeing through.

“This visit will see our two countries strengthen our relations. Japan sees Kenya as a key partner and a gateway to Africa thus prioritizing investment in the country,” Mr Toshimitsu told President Kenyatta.

The Japan Minister also briefed the Head of State on the planned Japan-Kenya Business Dialogue which is set to be held later this year in Japan and extended Prime Minister Yoshide Suga’s invitation to President Kenyatta.

The President acknowledged Japan’s continued support for Kenya’s development programs saying Kenya will continue working on deepening its long and historical ties with the Asian nation.

“We truly appreciate your support that has been visible in several sectors of our economy, and we look forward to a more intentional partnership even as the world continues to face the challenges brought about by the Covid-19 pandemic,” President Kenyatta said.

During his two-day visit, Mr Motegi and his delegation held several bilateral meetings with Kenyan counterparts to explore ways of expanding economic collaboration between Kenya and Japan in the post-Covid era and beyond.

Separately at State House, Nairobi, the President met and bade farewell to the outgoing United Nations Resident Coordinator Siddharth Chatterjee who is taking up a new posting in China.

The Head of State congratulated Mr Chatterjee for his successful tour of duty in Kenya and wished him success in his new assignment.

“You have been a valuable partner to us and we acknowledge your efforts and tremendous help that you have accorded my administration in various sectors,” the President told Mr Chatterjee.

11 trapped workers rescued after two weeks in China gold mine