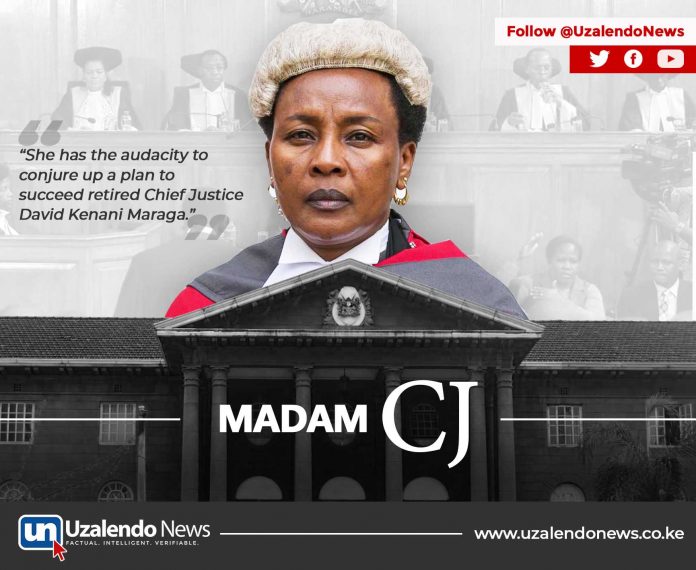 2021. Or Twendi Twendi Wani, the Akamba Community way is with us. This is the year when Kenya hugs her first Chief Justice daughter. – By Henry Kimoli

Unlike Unoka, the lazy character in the celebrated novel, Mwilu is never satisfied with offering burnt offerings before cultivating her professional farm. She opens up Virgin forests, often breaking her back in the process.

For this bravado, Mwilu hopes she can convince the deep state of her credentials to run the most powerful arm of the Government. Especially President Uhuru Kenyatta.

The iron lady, who famously said heaven does not belong to anyone’s mother, hopes to succeed where her predecessor, Kalpana Rawal failed.

She has matured the audacity to conjure up a plan to succeed retired Chief Justice David Kenani Maraga.

Valid dreams, because she is fully qualified for the job. Mwilu is daring. Courageous. Tough, ever ready to take the bull by the horns.

She annulled a presidential election, survived the menacing DCI George Kinoti and the overzealous Noordin Haji.

She floored male chauvinists during her interview as DCJ, by confirming her status as a wife to a sitting Senator.

And she has no qualms about it…reckoning that one would rather be a second wife, than live in sin.

Mwilu is a committed Roman Catholic and attends Holy Mass on all days of obligation. So who is backing Mwilu for this position?

The Roman Catholic Church backs her candidatuer to the fullest.

When professionally on the hedge, Mwilu seeks consolation from various Diocesan priests in Nairobi and Machakos.

She is said to be close to two Archbishops, who have stood by her through her most turbulent days.

The Wiper leader is on record as Mwilu’s lawyer.

They are on first name terms, talk regularly and advise each other mutually.

Mwilu is to Kalonzo what Justice Njoki Ndungu was to former President Kibaki.

Baba celebrates courage. He has time for Mwilu, owing to her firm and resolute convictions. He is convinced she has what it takes to succeed Maraga.

He vowed to revisit the Judiciary after embarrassing him in August 2017.

Uhuru has since embraced handshake and forgiven publicly, both Mwilu and Maraga. This was on October 10th, 2020.

The President may not want to ferry grudges on his retirement couch to Gatundu South.

He is determined to clear his table and retire peacefully, he is still very young and wants to enjoy every day of his early retirement.

As such, he will most likely allow the judiciary to elect its own candidate.

He is under pressure from his trusted aides to back Justice Kihara Kariuki for the position.

Given that a Kikuyu will be out of State House, there is pressure to retain one arm of the Government, through the Judiciary.

Behind every woman, there is a muscular man calling the shots, and protecting her.

This knight in shining armor; also happens to be Kenya’s longest-serving AG, is DCJ Mwilu’s mentor.

During her trial for graft, Wako was instrumental in selecting the lawyers, capable of neutralizing Kinoti and Haji.

The case appeared to became Wheeless when Wako become the BBI chair.

For starters, Wako is an academic giant, an A student who single-handedly destroyed FORD and the opposition in 1991. Wako split the opposition to ensure Moi won the election.

Wako was a DEEP STATE operative during Moi and Kibaki’s presidency.

Wako is still the personification of the DEEP State. He resonates perfectly with statecraft.