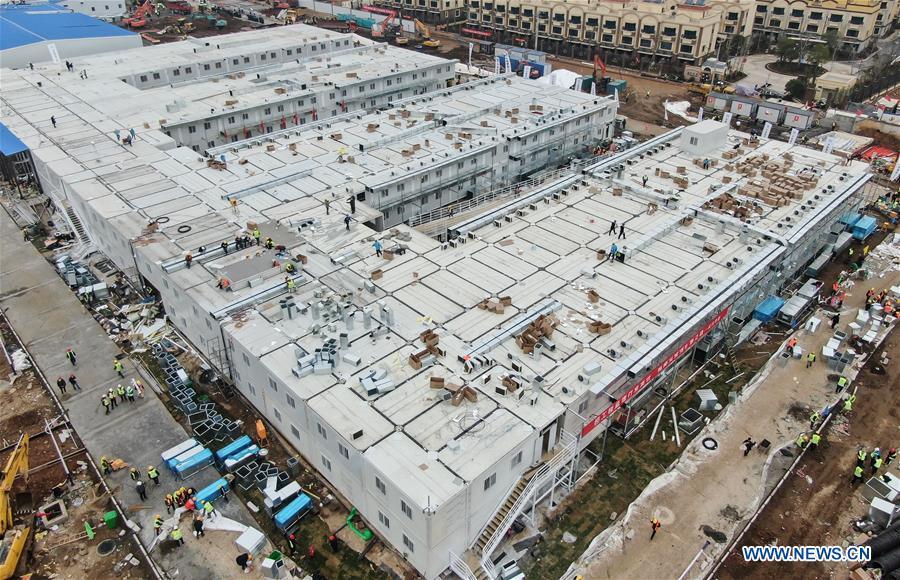 The first patients have arrived at a 1,000-bed hospital built in 10 days as part of China’s sweeping efforts to fight the Coronavirus.

Huoshenshan Hospital and a second 1,500-bed facility due to open this week were built by construction crews who are working around the clock in Wuhan.

As severe acute respiratory syndrome, or SARS, spread in 2003, a facility in Beijing for patients with that viral disease was constructed in a week.

The first patients arrived at Huoshenshan Hospital at 10 a.m. on Monday, according to state media. They gave no details of the patients’ identities or conditions.

“Today’s Chinese people are more deeply aware: where I stand is my China,” reported a Chinese daily.

“When this national sense of ownership is awakened, our mentality in the face of disasters becomes more mature.”

Authorities have cut most road, rail and air access to Wuhan and surrounding cities, isolating some 50 million people, in efforts to contain the viral outbreak that has sickened more than 17,000 people and killed more than 360.

The building has specialized ventilation systems and double-sided cabinets that connect patient rooms to hallways and allow hospital staff to deliver supplies without entering the rooms.

It is equipped with infrared scanners to warn if any employees show signs of the disease’s distinctive fever.

A Chinese company donated “medical robots” to deliver medicines and carry test samples, according to the Shanghai newspaper The Paper.

In other cities, the government has designated hospitals to handle cases of the new virus. In Beijing, the Xiaotangshan Hospital built-in 2003 for SARS is being renovated by construction workers.

The government has yet to say whether it might be used for patients with the new disease.