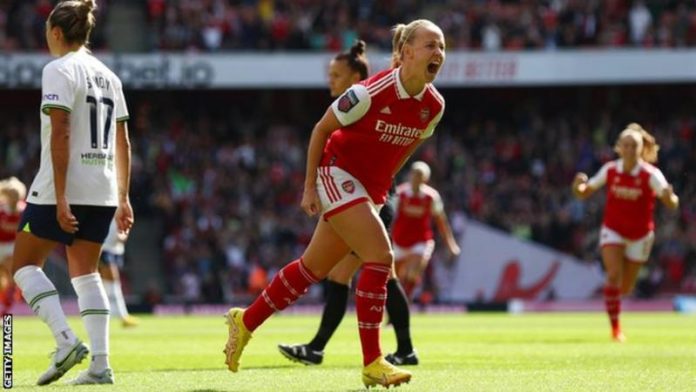 Vivianne Miedema scored twice as Arsenal cruised to a north London derby victory against Tottenham in front of a record crowd at Emirates Stadium.

The previous Women’s Super League record of 38,262 was set in 2019 at the Tottenham Hotspur Stadium in the reverse fixture.

Saturday’s win was Arsenal’s 10th successive victory in the WSL.

The Gunners piled on pressure from the start and a partisan crowd were willing to play their part in intimidating Tottenham, who struggled to get into the game.

Mead should have opened the scoring inside the first two minutes when her shot deflected wide for a corner.

The England forward made no mistake three minutes later, curling her shot in from outside the box into the top-right corner.

Arsenal had confidence in abundance and were willing to shoot from all areas, Kim Little saw her effort from outside the box go just wide and Laura Wienroither also had a chance from long range.

Spurs were sloppy in possession and Miedema latched on to a careless pass deep in the Spurs half to send the crowd wild for a second time.

Arsenal were completely dominant and Souza leaped highest to nod home Mead’s corner before Miedema glanced a header into the back of the net moments after the record attendance was announced over the sound system, with both greeted by rapturous applause.

Arsenal has not conceded in their past eight WSL games and has scored 39 goals in their 10 wins, which go back to last season.

The Gunners had 38 shots in their 4-0 win over Brighton on the opening weekend of the season and wave after wave of attack came again against Spurs, who were found wanting in possession and in attack.