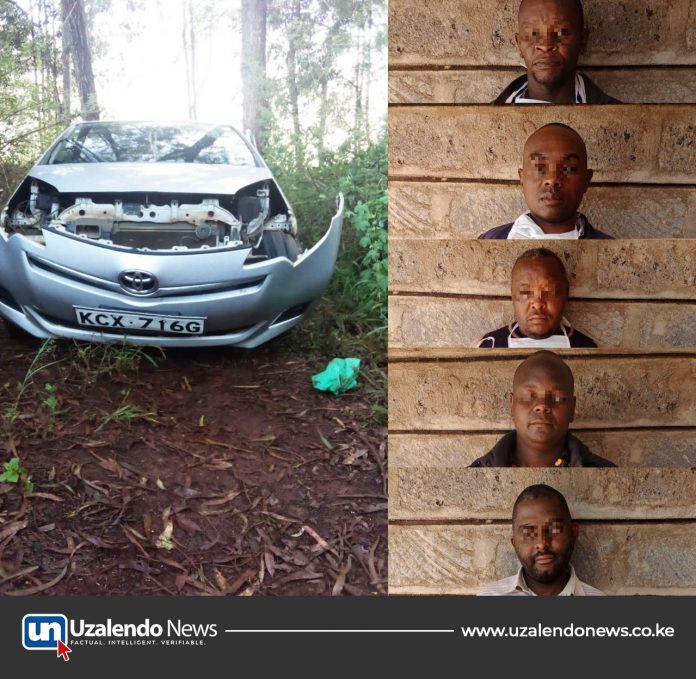 A five-member gang that has terrorized unsuspecting taxi operators has been brought to book.

The vicious gang that operates between Githurai, Ruiru and Kirigiti in Kiambu targets Little Cab drivers.

So organized are the gang members, that one of them poses like the usual cab passenger but once inside the cab, he squeezes the driver’s neck from the back seat and commandeers the car to a secluded area where his accomplices join him.

The driver is then robbed off his valuables after being assaulted and his vehicle vandalized.

In one such instance, on February 10th, one of the thugs using a fake identity requested to be taken to Kirigiti from Githurai-Kimbo, to allegedly pick his ailing mother.

The unsuspecting cab driver then set off for the journey but on reaching Kirigiti where they were supposed to pick an ailing woman, a male adult emerged & entered the vehicle instead.

The vehicle was then comandeered to Sasisni coffee bushes where three more thugs emerged.

They vandalised the vehicle making away with the headlights & tail lights, side mirrors, mirror switches, car battery and the spare wheel.

The gang carjacked two other cab drivers in a similar fashion, robbing them off their valuables before vandalising their vehicles & abandoning them in Mwihoko, Githurai in the dead of the night.

Three of the suspects are ex-convicts for various capital offenses including robbery with violence and murder.

The miscreants are well organized, complete with a specialized mechanic who vandalizes a vehicle within minutes of a carjacking and a customer relations expert, who lures unsuspecting taxi drivers to their trap.

The miscreants are well organized, complete with a specialized mechanic who vandalizes a vehicle within minutes of a carjacking and a customer relations expert, who lures unsuspecting taxi drivers to their trap.