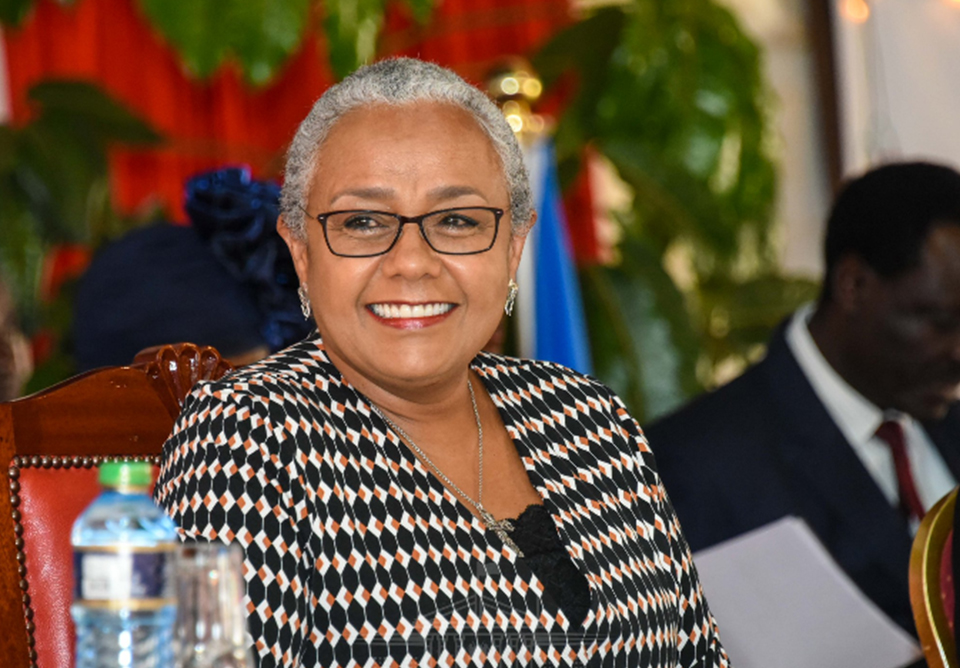 First Lady Margaret Kenyatta commended innovative Kenyan women for coming up with ideas that continue to transform lives in Kenya and the world.

The First Lady said innovations that bring change are key to removing of structural barriers that have in the past hindered women and girls from realising their full potential.

She said it is through innovations that the country will be able to address gender inequalities that slow down the achievement of national development goals.

“Innovation unlocks opportunities by placing people at the heart of development and programs that empower their lives,” said First Lady Margaret Kenyatta.

The First Lady spoke to Kenyan women at the Kenya School of Government in Kabete, Nairobi during celebrations to mark International Women’s Day. Today’s date was specifically set aside to mark the celebrations locally. The annual  event is normally celebrated globally on 8th March.

The theme for this year’s International Women’s Day is, ‘Think Equal, Build Smart and Innovate for Change.’

The theme places innovation at the centre of development especially the role played by women innovators and the impact of their innovations on gender equality and women empowerment.

The First Lady cited various innovations that have transformed households and communities in Kenya such as M-Pesa and the Kenya Women’s Finance Trust’s mobile banking solutions.

She said these innovations have unlocked opportunities for millions of women in the rural areas across the country.

“Tele-medicine has saved many lives of mothers and children in hard to reach remote areas,” said the First Lady.

She applauded Kenyan women and girls who have embraced innovation saying their new ideas in technology and science have helped in coming up with helpful interventions using the internet, mobile telephony and other emerging technologies.

“We celebrate our Kenyan women who are not only consumers of innovation, but also influencers in the innovation space – for providing real solutions using limited resources to improve women and girls access to infrastructure and public service,” the First Lady said.

“I especially want to recognise the school girls who came up with sensors for explosive devices; girls who produced mobile apps to fight Female Genital Mutilation; and girls who developed sensors to alert and avert human wildlife conflict, amongst others. You have made us proud,” said added.

During the function, First Lady Margaret Kenyatta launched the first edition of a book titled, “Pioneers & Transformers: The Journey of Women Trailblazers in Kenya.”

The book celebrates the achievements and the journeys of women as mothers, wives, entrepreneurs, teachers, doctors, activist, conservationists and politicians.

The First Lady also launched a curriculum on women leadership, which will be used to train women interested in politics.

She challenged eminent women in the country to embrace this year’s theme and start mentoring young women to take up science subjects in schools and colleges and also encourage them to enrol in Technical and Industrial Vocational courses to enable them fully participate in the country’s development.

She said her ministry has   put in place measures to eradicate all forms of discrimination against women and men.

“I am happy to report that since the last International Women’s Day, the country’s endeavour to realize the right to equal opportunities in all spheres for men and women, girls and boys has been remarkable and remains on course,” said CS Kobia.

Spouse to former Prime Minister Ida Odinga condemned the Court of Appeal judges proposal to lower the age of girls consent to sex  from 18 years  to 16 years saying it is unconstitutional and urged women to reject such a proposal.

Mrs Odinga said at age 16, a girl has not matured enough to make independent decisions on such weighty matters.