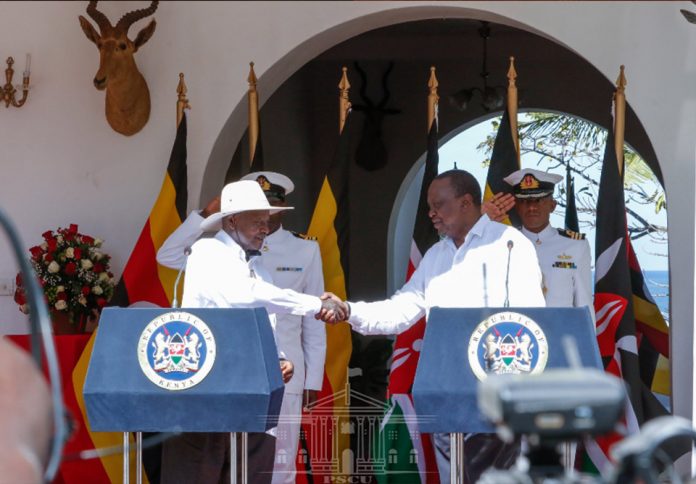 President Kenyatta pointed out that the move is aimed at attracting investments and promoting job creation in the country.

The President said past experience has shown that private sector enterprises succeed more when well supported by the government.

“I say so because the private sector is the engine of growth. Government certainly plays a central role, and equally certainly won’t relinquish it, but the fact of the matter is that the wide prosperity we all want is the product of men and women, not government, turning their labour and capital to productive work,” President Kenyatta said.

The President was speaking in Mombasa today during the Kenya-Uganda Business Forum that was also addressed by Ugandan President Yoweri Kaguta Museveni.

The forum whose theme was ‘Strengthening Economic and Trade Partnerships’ was attended by Deputy President William Ruto.

President Kenyatta said the forum provided an opportunity to boost business, trade and investment between Kenya and Uganda.

“This forum provides an opportunity for Uganda and Kenya to be trailblazers in the region in terms of trade ties,” President Kenyatta said.

He added that the forum underscored the important role played by trade and investment as drivers of international relations.

“It is also a good opportunity to create new business links; to strengthen existing partnerships; and to promote new investments, in capital and shared expertise alike,” he said.

Kenya’s value of total exports to Uganda stood at Kshs 61.8 billion in 2017 while the total bilateral trade was Kshs 103.8 billion, a demonstration of the strong commercial ties between the two countries.

“We therefore need to put together the necessary measures to enhance this partnership for the benefit of our people,” the President said.

President Kenyatta said Kenya and Uganda have resolved to partner in developing first class infrastructure under the framework of the Northern Corridor Integration Projects (NCIP) with the aim of increasing connectivity between the two nations and the rest of the continent.

President Museveni said it was clear that the private sector was the vehicle that would create wealth for the two countries.

“It is this wealth which will create the much needed jobs in our two countries,” President Museveni said.

He said for the private sector to operate successfully it needs a stable local and international markets adding that the most important enabler for the both is good infrastructure.

While assuring the private sector of cheaper electricity in Uganda following his government’s investment in power generation, President Museveni once again commended President Kenyatta for giving priority to infrastructure development in Kenya.