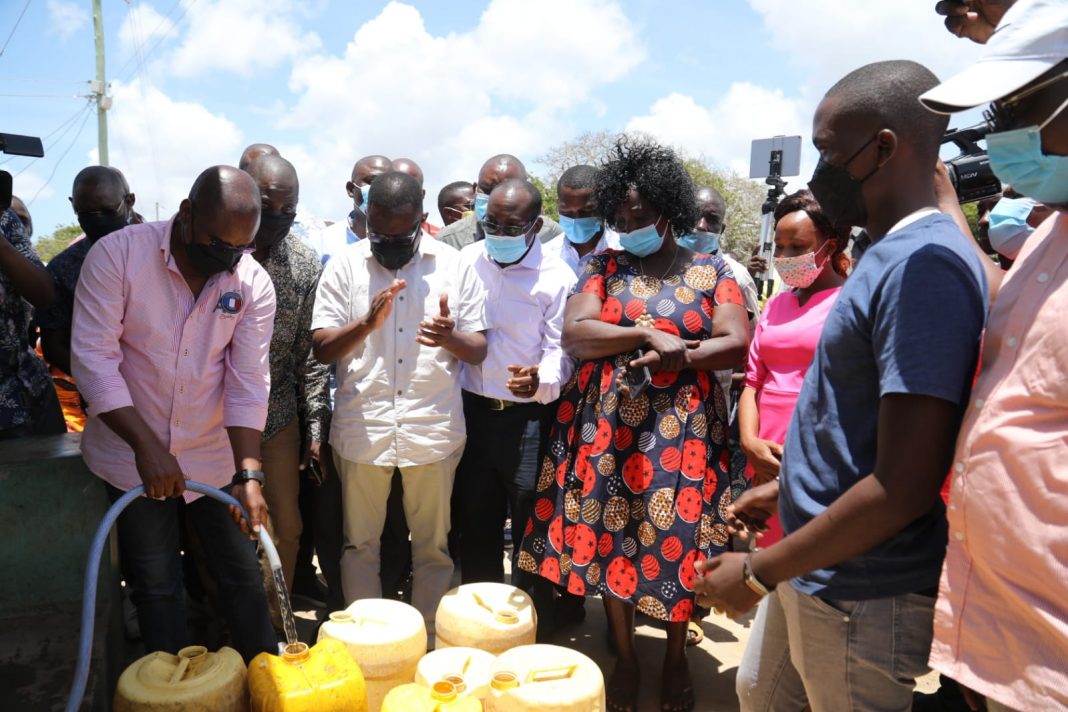 As drought continue to ravage some parts of Kilifi and the country in general, the Kilifi county government has commissioned three water projects worth Sh20 million in Magarini.

The projects will help the locals access water easily during this dry season that has affected many parts of the country.

They include Masheheni- Mbaoni -Mwangatini at a cost of Sh12 million and shall serve a population of 3,500 people.

More than 6,800 people are set to benefit from the three water projects in the area which has been affected by the drought disaster.

Kilifi Governor Amason Kingi officially launched the projects while being accompanied by his deputy Gideon Saburi.

The water projects have reduced the distance for people to access water from 10 kilometers to less than three kilometers.

Currently, the drought has affected most of Magarini leading to deaths of domestic animals and challenges for people in accessing water but with the new project at Masheheni Mbaoni Mwangatini residents will be able to get water easily.

Residents interviewed said before the project was commission they were really getting it rough struggling to get water yet there is no food at home.

Speaking after the launch of the project he said both humans and livestock all depend on water from pipelines something which has forced water companies to also do water tracking to areas that have no piped water.

“This means that the pipeline water cannot sustain the people that’s why water companies like Malindi Water and Sewerage company ensure that they supply water to affected residents,” he said.

He said whenever they set up a water project they always make sure there is a storage tank so as to make sure the water supply is consistent daily.

The chief officer in charge of Water Fredrick Kaingu said the water pipeline was tapped from Sabaki river that is about five kilometres away and has enabled residents to access piped water for the first time since independence.

“The governor has promised to enhance through the supplementary budget to open more pipelines by making sure they bring the services to the household level,” he said.

In Magarini ward he said there was a scarcity of rain which made it difficult for people to look for both water and food at the same time adding that now the burden for water has been removed and locals are left with only challenge 0f food.

He said currently residents in Kilifi county can access water within a radius of three kilometres but before devolution people could walk for over 10 kilometres in search of water.

Grace Kadzo Karisa a village elder of Masheheni C thanked the county government for setting up the water pipeline as they have been suffering for many years carrying water from River Sabaki.

She said that time they used to have family conflicts with their husbands for delaying bringing water.

“Right now there is famine we did not harvest anything for the last three years, imagine a person who had four acres only got a half-sack of maize, drought has hit the area and there is famine,” he said.

She called on the county government to supply relief food as people have nothing to eat in their homes and livestock are dying.

Munga Mzigo from Pokea Mwana area in Magarini said famine has contributed in high school dropout rates as families have no food to eat.

“We call upon the government to bring relief food, and revive the irrigation projects which have stalled, bring machines for us to pump water as the only ones were destroyed by floods,” he said.