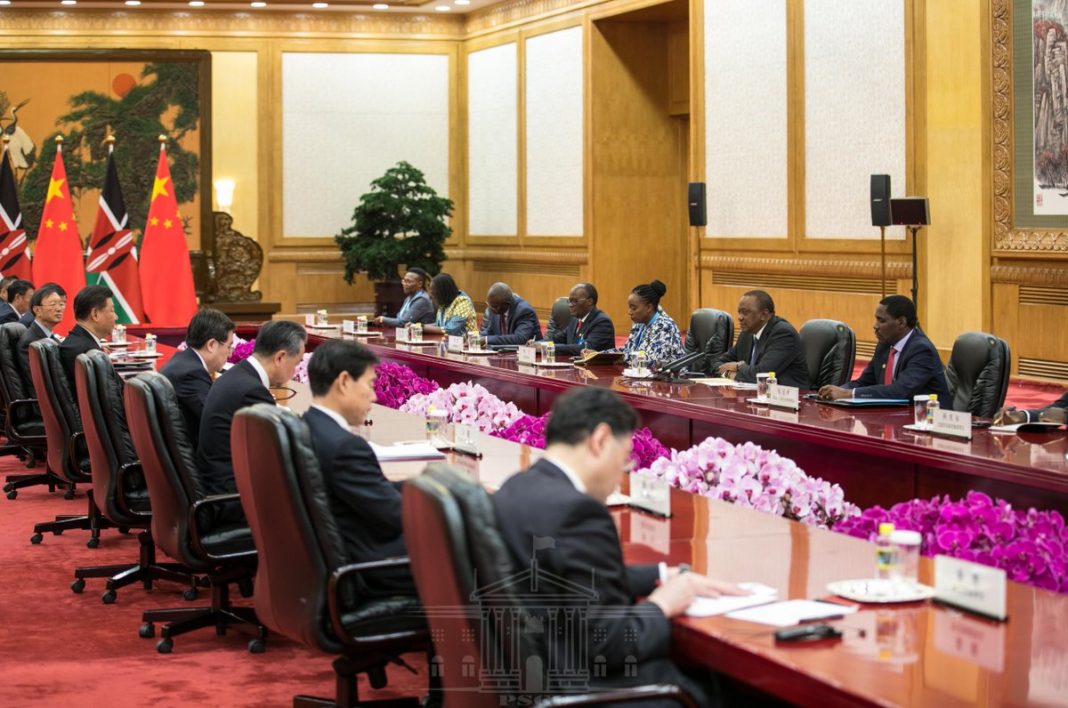 The projects include the Konza Data Centre and Smart Cities Project to be undertaken by Chinese telecommunications giant Huawei at a cost of Shs 17.5 billion and the construction of the Nairobi JKIA to James Gichuru expressway on a PPP arrangement by the China Road and Bridge Corporation for Shs 50 billion.

Also signed is the operation and maintenance service agreement for the Nairobi to Naivasha segment of the Standard Gauge Railway (SGR).

The Konza Data Centre and Smart City Facilities Project was conceived in 2017 by the Ministry of Information, Communications and Technology and Huawei, and entails the development of core ICT infrastructure which includes National Cloud Data Centre, Smart ICT Network, Public Safe City and Smart Traffic Solution, and Government Cloud and Enterprise Service.

Konza Data Centre and Smart City Facilities Project is part of the Konza Techno City, a Vision 2030 flagship project started in 2008 and is aimed at developing technology-intensive and high-tech industries in ICT, biotechnology and e-commerce. Phase I of the project is estimated to create over 17,000 jobs and contribute an estimated Shs 90 billion to the Kenyan economy.

The construction of the JKIA to James Gichuru expressway is expected to ease traffic flow on the busy Mombasa highway as part of the ongoing interventions by the Government to decongest key roads in Nairobi.

The expressway will be the first of its kind in Africa with unique design features that combine underpasses, overpasses, exits as well as a Bus Rapid Transit (BRT) component covering the entire stretch.

Earlier, President Kenyatta attended the opening ceremony of the Second Belt and Road Forum (BRF) at the China National Convention Centre in central Beijing where he addressed a High-Level Session attended by his host, President Xi Jinping of the Peoples Republic of China.

In his remarks, President Kenyatta thanked China for the Belt and Road Initiative (BRI) projects which he said are expanding economic activities and unlocking potential for prosperity in many developing countries including Kenya.

“Since inception, the Belt and Road Initiative has forged cooperation in the development of critical sectors including expansion of infrastructure, education and capacity building, trade facilitation and investment, agricultural modernization, industrial promotion and energy connectivity. Collectively, these developments are expanding economic activities and unlocking potential for prosperity,” President Kenyatta told the world leaders.

The President said Kenya is proud to be a founding and active member of the BRI adding that Kenya shares a common vision with China for the development and transformation of the country and the entire East African region.

“We are a gateway to the African segment of the Golden Belt of the BRI that stretches from the Port of Mombasa to Kisumu on Lake Victoria and the East African hinterland, to the port of Kinshasa. In addition, is the corridor stretching from Lamu to South Sudan and Ethiopia-the LAPSSET corridor that connects the Great North Corridor to northern Africa,” the President said.

He said Kenya is proactively playing its part in the delivery of BRI through the ongoing modernization of the Port of Mombasa and the construction of the SGR and called on neighbouring countries to play their part in the initiative.

President Kenyatta said to achieve the full benefits of the BRI in Kenya and the rest of the African continent, focus should be on building synergies and complementarities between infrastructure and industrial development. For this to happen, the President called for greater participation of the private sector as a key driver of industrial transformation that leads to generation of jobs, creation of growth and prosperity.

The Kenyan leader welcomed President Xi Jinping’s firm commitment to the continued opening up of the vast Chinese market to imports from developing countries affirming that Kenya is ready to take advantage of these opportunities for the mutual benefit of the people of both nations.

At a different function, President Kenyatta invited Chinese investors to partner with the government and local entrepreneurs in setting up businesses in the various Special Economic Zones (EPZ) whose development is underway in parts of the country such as Dongo Kundu in Mombasa, Lamu, Kisumu and Naivasha.

The President made the invitation when he presided over the official opening of the Kenya-China Business Forum organized by the Kenya Investment Authority (KenInvest) and the China Africa Development Fund on the sidelines of the ongoing Belt and Road Forum in Beijing, China.

He said the government is backing up infrastructure development with a range of policy reforms aimed at creating an enabling environment for trade and investment to thrive.

“My Government has now adopted a comprehensive Kenya investment policy to guide investment procedures and processes, both at national and county levels. We have also established a One-Stop Centre to facilitate ease of doing business including establishing and automating service delivery through innovative business platforms such as Huduma Namba, E-Citizen, E-Regulations, iTax, Single Window Electronic Clearing System and Land Registry,” the President told Chinese investors drawn from across the vast country.

The President noted that as a result of robust economic planning, fiscal reforms and good governance, the 2018 growth rate of the Kenyan economy is now the highest in the last 9 years.

“Our Economic Survey released only yesterday (Thursday) indicates that (economic) growth remains resilient and broad based, accelerating from 4.9 in 2017 to 6.3 percent in 2018, well above Government and IMF estimates,” the President said.

President Kenyatta who is on a three-day working tour of China is accompanied by Cabinet Secretaries Dr. Monica Juma (Foreign Affairs), Peter Munya (Trade) and James Macharia (Infrastructure) among other senior government officials.