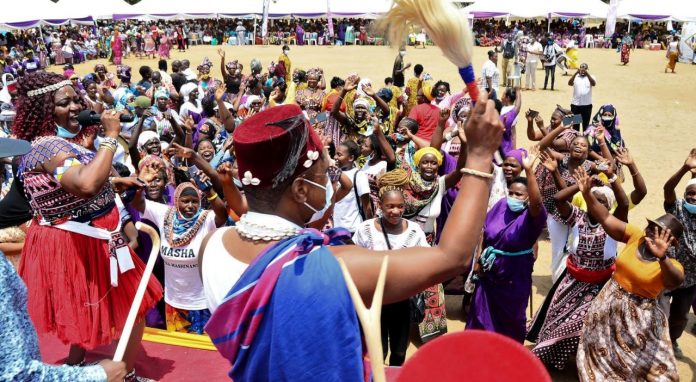 Kilifi Governor Amason Kingi has lauded efforts made by his administration to empower women in the county to meet their social and economic demands in their lives.  – By Ramadhan Kambi.

He talked even as Ganze MP Teddy Mwambire called for leaders support to end the plight of young mothers in Ganze and Kilifi County in general.

Speaking during the celebrations to mark international women’s day at Vipingo in Kilifi South Sub county, Governor Kingi said the event marked annually to realize the dreams of the women around the world, his administration has worked around the clock to come up with initiatives meant to benefit and empower them in the county.

He said that among the achievements he has so far achieved include the employment of half of his county cabinet to be comprised of women as a gender balance.

Among the other initiatives he said was the establishment of the mbegu fund which started with a loaning capacity of Sh80 million but has now been able to disburse more than Sh200 million mainly to empower women and youths.

“Today and because I have a lot or respect for our women, half of my county cabinet comprises of women. These are Luciana Sanzua (Agriculture), Rachael Musyoki (Education and ICT), Nahida Mohamed (Trade and Tourism), Dr Anisa Omar (Gender, Youths and Sports) and Maureen Mwangovya (Lands and Planning),” said the Governor.

He later called the County CEC to greet the women and said that every person in the county has to empower at least one or three women to improve their livelihoods.

We started the Mbegu Fund initiative so that we could empower our women and youths and this program has worked out well for the benefit of them. We started with the disbursement of Sh80 million in 2018 but now, we are far ahead with the recent issuance of Sh200 million,” he said.

Ganze MP who also addressed the women called for enhanced efforts to make sure that the plight of young mothers in the region are upheld and protected.

He gave his own example of the efforts he has done to empower girl child including the ongoing setting up of a young mothers’ school in Ganze constituency.

“In Ganze, we are setting up a school for young mothers to go back to education after giving birth. We know this is challenging but I urge leaders present here to make sure this becomes a reality within us,” said Mr Mwambire.