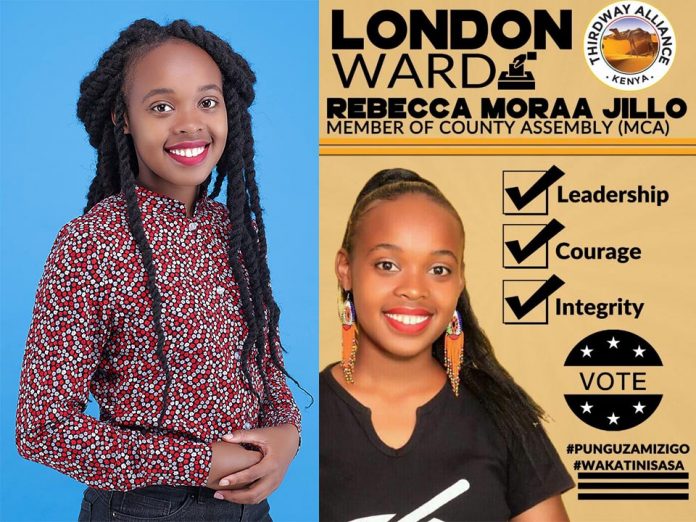 Arguably the youngest political contender in this decade, at 22 years Rebecca Moraa Jillo is more than determined to change the face of London Ward, in Nakuru County. – By Gerald Gekara.

The Multi-Media University student who is currently taking Political Science and Psychology studies, says she has enough girth to take on her ‘well-established’ rivals.

“The people of London Ward do not want to be told who to vote for. What we want is to be represented accordingly and our issues to be addressed by a leader who understands our problem. I believe I am that leader.” Ms. Moraa said in an interview.

She is vying for the seat under the Third Way Alliance (TWA) says she will distance herself from the politics of hate and insults and instead focus on the party’s principles.

“Third Way alliance is a neutral party, and focuses on the ‘punguza mzigo’ slogan. Our beliefs is to provide services to Kenyans who deserve, and reduce the burden to survive.” she added.

Moraa has taken up several leadership posts in her university, among them being in charge of the Academic.

She has received accolades by her fellow comrades who have persistently awarded her a chance at the university leadership since 2019.

The by-elections will be held following the death of Samuel Karanja Mbugua who died of suspected Covid-19 complications.