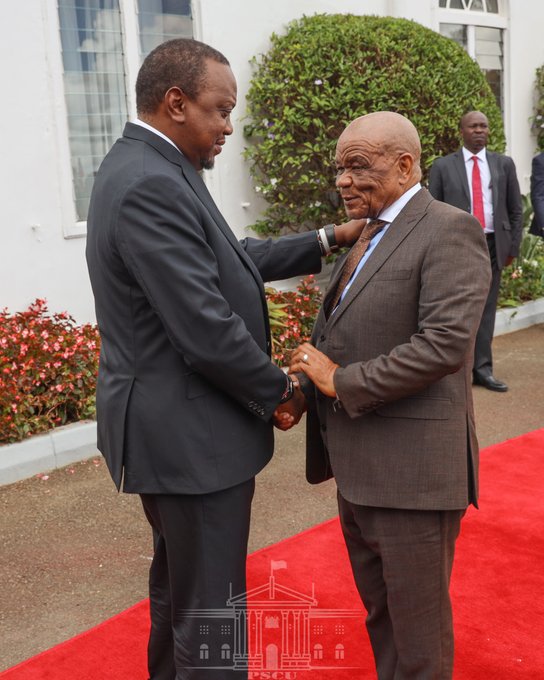 President Uhuru Kenyatta has appreciated the Kingdom of Lesotho’s steadfast support and solidarity with Kenya in various continental and international fora.

The President noted that Lesotho’s support and solidarity with Kenya has over the years been unparalleled.

“I particularly recall with gratitude Lesotho’s unwavering support during my tenure as chairperson of the African Peer Review Mechanism from 2015 to 2018. Further, we cannot forget your government’s support to Kenya’s candidature for the United Nations Security Council (UNSC) non-permanent seat,” President Kenyatta said.

The President spoke last evening at State House, Nairobi during a state banquet he and First Lady Margaret Kenyatta hosted in honour of the visiting Right Hon. Dr Motsoahae Thomas Thabane, Prime Minister of the Kingdom of Lesotho.

Deputy President William Ruto was among several senior government officials and members of the diplomatic corps who attended the state banquet.

President Kenyatta said he looked forward to further support from Prime Minister Thabane and through him that of other members of the Southern African Development Community (SADC) in campaigning for Kenya’s candidature for the UNSC non-permanent seat in the election slated for June next year.

“As I have said severally, I strongly believe that a win for Kenya is a win for Africa,” the President said as he promised to continue working closely with the Lesotho PM for the mutual benefit of the citizens of Kenya and the Kingdom of Lesotho.

The President said that at the core of the strengthening Kenya-Lesotho ties is the strong desire of advancing the Africa Union agenda of a free, peaceful, assertive and prosperous continent.

“I look forward to the successful implementation of the outcomes of our deliberations and I wish to once again reiterate Kenya’s steadfast commitment to continue working with the Kingdom of Lesotho to foster economic development and shared prosperity for the citizens of our two countries,” President Kenyatta said.

Dr Thabane makes history as the first Prime Minister of the Kingdom of Lesotho to undertake a state visit to Kenya although the two countries enjoy long and cordial relations that date back to pre-independence days.

President Kenyatta said PM Thabane’s visit to Kenya provided a unique opportunity for the two countries to redefine and recalibrate their bilateral relations, taking their cooperation to a higher level.

“Further I also believe that your presence here affirms your own personal commitment and goodwill towards working with us to achieve the socio-economic transformation and prosperity that our citizens aspire for,” the President told the visiting premier.

In addition to government-to-government relations, President Kenyatta emphasized the need to strengthen people-to-people ties through trade, tourism, sports and other platforms of sociocultural interactions.

He expressed satisfaction that already there is a vibrant community of Kenyan diaspora in Lesotho who have been working well with their Basotho brothers and sisters in various sectors of the economy including education, health, Non-Governmental Organizations as well as the business sector.

“And we look forward to nurturing these relations by facilitating our respective diasporas to further solidify our bonds of friendship,” the President said.

Prime Minister Thabane reassured President Kenyatta of the Kingdom of Lesotho’s support in various areas including the fight against terrorism, saying Kenya has continued to inspire many African countries especially in its role at the international arena.

“We are also aware of the onerous tasks that Kenya plays both in East Africa and the IGAD region. Your leadership role Mr President, has reverberated beyond the African continent, reaching the shores of those sceptics who always harbour some illusion that Africa is not capable to determine the needs of its destiny and fate,” the Lesotho PM said.

The Lesotho leader said the main aim of his state visit to Kenya was to rekindle the spirit of friendship that has existed between the two countries and their people for many years.

Dr Thabane recalled that for many years Lesotho had a diplomatic mission in Kenya along Mama Ngina street in downtown Nairobi and expressed the need for the two countries to consider re-establishing their missions in each others capital – Maseru and Nairobi – in the near future.