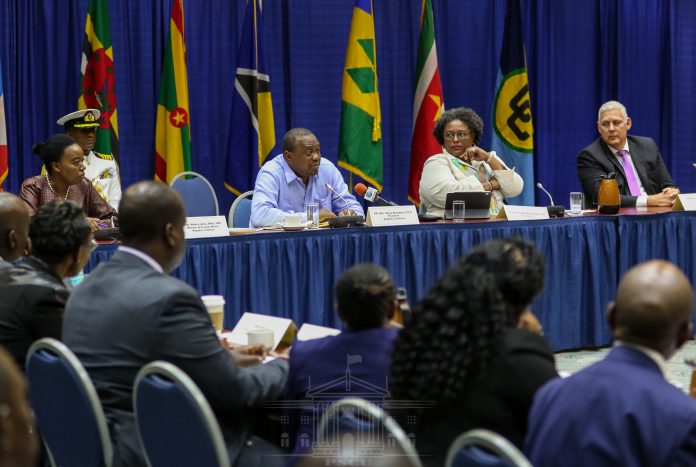 President Uhuru Kenyatta has urged the Caribbean community to support Kenya’s bid for the United Nations Security Council (UNSC) non-permanent seat for the period 2021 to 2022.

The President made the appeal as he pitched for closer cooperation among African, Caribbean and Pacific (ACP) countries to spur development and economic growth.

“Kenya’s candidature is informed by the critical role the UN Security Council plays in the maintenance of international peace and security,” the President said as he assured that Kenya will continue to play a leading role in peace, security and conflict management in the Horn of Africa region and other parts of the world.

The Head of State, who was accompanied by Foreign Affairs Cabinet Secretary Monica Juma, spoke during a meeting with leaders of the Organization of Eastern Caribbean States (OECS) in Bridgetown, Barbados.

Kenya will host the next session of the ACP-EU Cotonou Agreement Summit in December this year in Nairobi.

“I hope to see you all in Nairobi and I very much look forward to fruitful deliberations as we push the ACP agenda forward,” President Kenyatta told the Caribbean Community (CARICOM) leaders who attended the Bridgetown meeting.

In the spirit of closer collaboration between Kenya and the Caribbean community, President Kenyatta asked the OECS to support Kenya’s bid to host the Global Service Delivery Model (GSDM) as recommended by the UN Secretary General.

He said Kenya was picked after it met the threshold on availability of space, qualified personnel, employees’ safety, location and affordable costs.

“Kenya is host to the only United Nations Office in Africa. It is my hope that during deliberation on this matter during the 5th Committee of the United Nations General Assembly, OECS countries will support Kenya,” President Kenyatta said.

The President also called on the Eastern Caribbean States to establish diplomatic missions in Kenya as well as at the United Nations Environment Programme (UNEP) and UN-Habitat to facilitate frequent consultations and follow up on environmental and human settlement matters.

“This process of regular consultative dialogue and active engagement focused on matters of mutual interest in the international arena will result in symbiotic benefits on matters of peace, security and development,” he said.

Barbadian Prime Minister Mia Amor Mottley said the meeting between President Kenyatta and the CARICOM leaders has opened a new chapter of cooperation between Kenya and the Caribbean.

“We are truly on the right track of forging deeper and better relations between CARICOM countries and Kenya,” the Prime Minister said.

To further cement relations between the Caribbean and the East African Community, President Kenyatta singled out trade, investment, tourism and cultural cooperation as some of the key drivers of the collaboration that should be crafted through a regional Free Trade Area (FTA) under appropriate World Trade Organization rules.

“Through this route, our respective countries stand to gain from the benefits of trade and most preferably through a duty free quota free trading mechanism,” the President said.

He welcomed the ongoing discussions to have direct links between the Africa Union and the Caribbean Community (CARICOM), saying the same should be extended to the Pacific region.

“There is need for us to engage and share ideas on regular basis as ACP countries. Let us work, invest, develop and deal with global challenges together as a group.  We must strive to speak in one voice,” President Kenyatta said.

The President praised the growing partnership between Kenya and the Organization of Eastern Caribbean States saying if implemented well, it will make the member countries a force to reckon with in coming years.

Noting that intra- ACP trade stands at less than 20 percent, President Kenyatta expressed the need to create the right environment to encourage each region’s private sector to invest and trade at all levels.

“As governments, we can support these initiatives through enabling connectivity and movement of people, goods and services,” he said.

The Kenyan leader informed the meeting that Kenya and Barbados have already agreed to commence work towards the conclusion of an air services agreement, saying there is no reasons why other Caribbean countries cannot follow suit.

The President said connectivity will enable the OECS countries to be enjoined with the East African Community whose population is 186 million and COMESA with a population of 400 Million, both of which Kenya is member.

“More importantly, connectivity will create a bridge into the African Continental Free Trade Area (ACFTA) agreement, which came into force on 30th May 2019 and became operational on 7th July 2019. Through Kenya, any business from CARICOM can gain access to the African market with a population of 1.2 billion,” he said.

Prime Minister Allen Chastanet of St Lucia who is also the Chairman of CARICOM and Ambassador Irwin LaRocque, the Secretary-General and CEO of CARICOM led the Caribbean community in endorsing resolutions of the meeting which included forging closer cooperation between Kenya and the Caribbean.