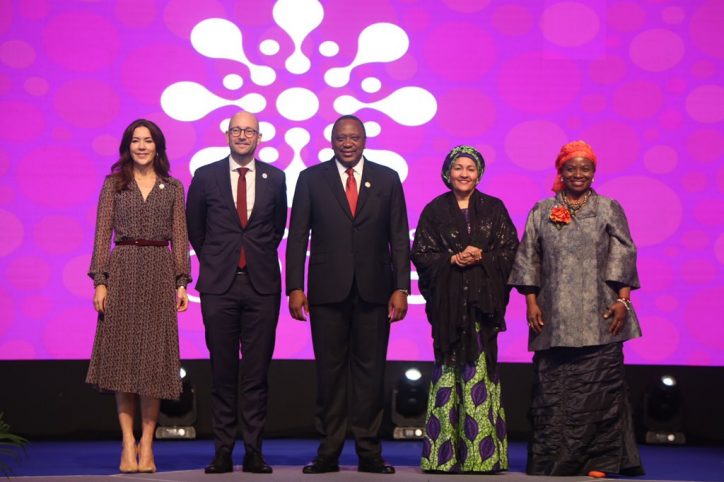 President Uhuru Kenyatta today reassured the world of Kenya’s commitment to the full realization of sustainable human development inline with the United Nations International Conference on Population and Development (ICPD) Programme of Action.

The ICPD Programme of Action, adopted in 1994 by 197 UN member states, is a far sighted sustainable human development blueprint that places the human rights of individuals, rather than the numerical population targets, at the centre of the global development agenda.

The President said his administration’s priority is to increase budgetary allocations to sectors that guarantee the advancement of the wellbeing of all Kenyans.

In the national action plan covering to be implemented over the next decade, the President committed to eliminate Female Genital Mutilation (FGM) by 2022 in addition to eradicating all forms of gender-based violence and harmful practices by 2030 through the strengthening of coordination mechanisms and addressing socio-cultural norms that propagate the practices.

“I would like to restate my personal commitment and that of the Government of Kenya to providing the leadership necessary to ensure that this practice ends within this generation,” the President said.

As part of the comprehensive eleven-point agenda, President Kenyatta said Kenya will ensure that all citizens attain the highest possible standard of health through the elimination of preventable maternal and newborn mortality, mother to child transmission of HIV, teenage pregnancies and new adolescent and youth HIV infections by 2030.

“I wish to reaffirm Kenya’s commitment to the noble ideals of International Conference on Population and Development (ICPD) Programme of Action in line with the framework of our constitution, national social-cultural values and ethos,” he said.

The Head of State announced the commitments today when he presided over the opening of the International Conference on Population and Development  (ICPD25) that is being hosted by Kenya at the Kenyatta International Convention Centre (KICC) in Nairobi.

The global conference organized by Kenya, Denmark and the United Nations Population Fund (UNFPA) is being attended by thousands of participants from over 100 countries including several Heads of State and Government, dozens of international organizations, civil society groups and leaders from the private sector.

President Kenyatta assured that Kenya will ensure universal access to quality reproductive health services including prevention and management of gender based violence in humanitarian and fragile contexts by 2030.

He said the Kenyan government will track and monitor the implementation of the outcomes of the Nairobi ICPD conference through the National Council for Population and Development.

Other commitments made by President Kenyatta included enhancing the capacity of relevant government institutions to increase availability and accessibility to high quality, timely and reliable population and related data at national, county and sub-county levels.

He also committed to the full implementation of the Competence Based Curriculum (CBC) to ensure  learners are equipped with relevant competencies and skills from an early stage for sustainable development.

The Head of State emphasized that advancing people’s rights, in particular, women’s rights, their choices and their wellbeing is the path to prosperous and resilient societies.

“Indeed, as it has often been said women are the backbone of the family and the bedrock of a nation,” the President said.

While noting the achievements made since 1994 when the ICPD Programme of Action was adopted in Cairo, Egypt, President Kenyatta said there was need to accelerate the implementation of the resolutions adopted in the Cairo ICPD conference in order to build sustainable, vibrant and inclusive societies.

“Kenya joins other nations in celebrating the progress made since Cairo.  We have achieved universal access to free primary and secondary education.

“Indeed, this year we achieved 100 percent transition from primary to secondary education. Further, we have achieved gender parity in both primary and secondary schools,” the President noted.

On health, President Kenyatta said the country has significantly reduced child and infant mortality through free maternity services and free healthcare for children below one year in government health institutions.

Highlighting Kenya’s achievements in enacting laws that focus on the eradication of gender based violence and harmful practices, the President cited the Prevention Against Domestic Violence Act of 2015 as one of the laws that have been put in place since 1994.

On child marriages, President Kenyatta said the percentage of young women between 20 and 24 years of age being married has declined from 34 percent in 1994 to 25 percent in 2019 but expressed the need to accelerate women’s equal participation and representation at all levels of the political, public and corporate spheres.