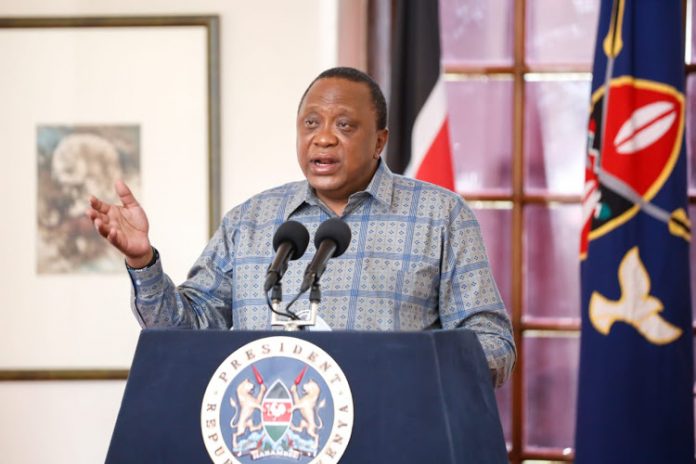 President Uhuru Kenyatta has said that the Covid-19 pandemic has worsened the impact of climate change on African economies noting that the continent’s GDP had, for the first time in 25 years, dropped by over three percent in 2020.

“We do this in recognition of the fact that Africa is one of the most vulnerable continents to climate change and climate variability, a situation aggravated by the Covid-19 pandemic.

He noted that Covid-19 had driven over 40 million Africans into extreme poverty, adding that African countries will require improved access to finance to be able to restart their economies and embark on a low carbon, resilient and inclusive recovery.

The Head of State spoke Tuesday evening at State House, Nairobi during a virtual leaders’ dialogue on the African Covid-Climate Emergency organised by the Global Centre on Adaptation (GCA) and the African Development Bank (AfDB).

He told the high level meeting that was co-chaired by GCA Chairperson Ban Ki-moon and President of AfDB Akinwumi Adesina that Kenya had deployed significant national resources to scale up climate change adaptation efforts.

“Kenya’s updated Nationally Determined Contribution (NDC) provides a comprehensive overview of adaptation priorities, with an estimated implementation cost of US$ 4.4billion per year.

“While we can realistically mobilize domestic resources to meet 13% of this cost, we would need our external partners to support us fund the remaining 87%,” President Kenyatta said.

“I must underscore on the need to leverage on the private sector and international finance, if we are to achieve this Climate Adaptation agenda. It is only through partnerships that we can strengthen and accelerate resilience on the Continent,” he said.

US Secretary of the Treasury Janet Yellen, who represented President Joe Biden, reiterated America’s commitment to the Paris Agreement and vouched for a balance between economic growth and climate change mitigation.