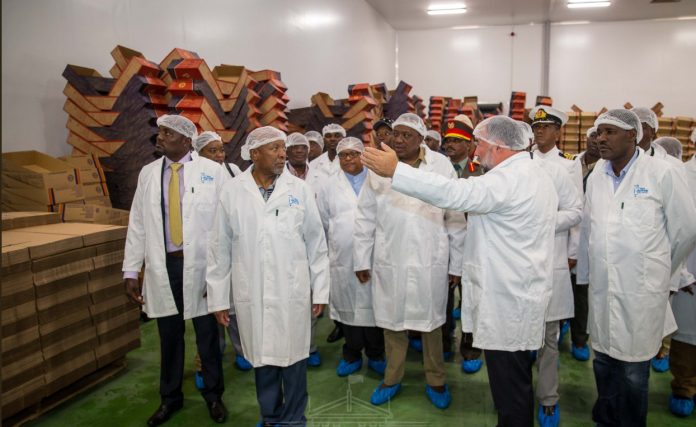 He said many nations inlcuding Kenya gain almost nothing from their sea resources including fish.

The President said it was disappointing that foreign nations are benefiting more from the abundant fish in the territorial waters of many African countries.

He said African nations should work together and learn from the examples of countries like Namibia which has implemented progressive measures to develop its fisheries sector.

The Kenyan leader spoke when he toured Seaflower Pelagic Processing factory in Walvis Bay, Namibia, which has the distinction of being the biggest fish freezing factory in Africa.

The factory was set up recently at the cost of 40 million US dollars (about KSH 4 billion) through a partnership between the Namibian Government and a private investor.

The factory freezes 600 tonnes of fish on a daily basis and has created jobs for 700 people.

President Kenyatta instructed Agriculture Cabinet Secretary Mwangi Kiunjuri and Trade and Industry CS Peter Munya to immediately take steps to learn from the Namibian experience so that Kenya can have a similar factory.

Vice President Mbumba said Namibia and Kenya are united by true freindship that started when Namibians were fighting for freedom.

“When SWAPO was fighting for freedom, the first vehicle it ever owned was bought by Kenya. We will also never forget the role played by the Kenyan contingent of UNTAG which remained behind at the cost of Kenya to protect Namibians until the country was stable,” said Vice President Mbumba.

“We are here to learn from how Namibia is benefiting from its blue economy even as we continue to support and partner with them in various other fields,” said President Kenyatta.

The port of Mombasa and Walvis Bay are similar because they serve many nations in the interior of Africa.

The President was taken on a tour of the port and shown how the Government is reclaiming land from the sea to enable the port to handle ships with bigger capacity.

To enhance its efficiency in serving neighbouring landlocked countries, Namport has assigned dry ports to the different nations so that they can manage their own cargo.

President Kenyatta said Kenya will study the idea of dry ports for neighbouring countries that depend on the Port of Mombasa for their imports and exports.

“That kind of arrangement can let them manage their own cargo and our job will be to be efficient port owners,” said President Kenyatta.

He said the port of Mombasa and Namport will partner in the areas of efficiency enhancement, and the bridging of management and administration gaps that lead to corruption with the aim of improving service delivery.

The President said mismanagement and other malpractices at the ports create inefficiencies which in turn affect economies of many countries that depend on these ports as gateways into their countries.

The Namibian Government has already requested guidance from Kenya in the setting up of a single window system for processing and clearing transit cargo across many borders. The system allows importers to input data once which is then used by all countries through which the goods pass on their way to their destinations.

President Kenyatta said Africa will only succeed when all nations agree to collaborate to achieve progress.

President Kenyatta is on a State Visit to Namibia and was yesterday hosted at State House, Windhoek, where he held bilateral talks with President Hage Geingob.

On Thursday, President Kenyatta was the Chief Guest at the 29th Namibia Independence Day celebrations.