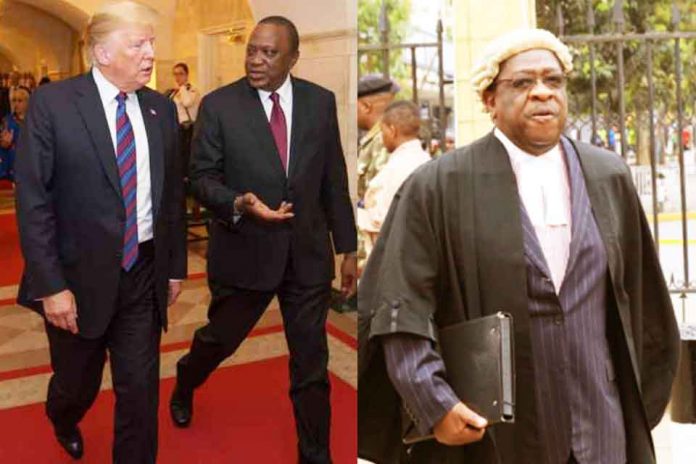 The chicken finally came home to roost for former AG Amos Wako, as the US Government declared him an illegal immigrant. This is not the first time for Wako to be banned; in October 2009 he was given a travel ban by the USA for ‘deliberately blocking political reforms’ following post-poll violence in 2008.

Here are five possible reasons for his ban to the US over graft.

Wako became AG in 1991, at the height of the Goldenberg scandal.

He is said to have watched as masked powerful men used Kamlesh Pattni to steal billions of shillings through dubious means. The former AG continued to smile as the Goldenberg proceeds of crime were laundered through various city banks.

It was while he was AG that key suspects of the scam such as the late Professor George Saitoti and Musalia Mudavadi were cleared of any wrongdoing. As the Chief legal advisor to the Government, he did nothing to prosecute the real

When Kibaki became the President in 2002, Wako helped them avoid justice in the Anglo Leasing scandal…they not only revived the ghosts, but he watched as the Kibaki men looted Kenya. To date, no one has been convicted over graft.

As the AG, Wako was privy to all Chinese deals that edged out American and European firms from the lucrative Kenyan market. US suspects that Wako was privy to the sharing of graft money through a complex web of financial wheeler dealing, but abetted the crime.

Amos Wako is today among the top ten richest persons in Kenya. He plays in the same financial league as the Moi, Kenyatta, Ndegwa and Njonjo families.

During the 2002 elections and any other cycle after that, he gave hefty financial support to the top two candidates. He has in the last two elections funded both President Uhuru Kenyatta and Raila Odinga.

5. The Gichuru and Okemo scam

Donald Trump suspects Wako was a beneficiary of the massive power industry fraud orchestrated by Gichuru and his cahoots within the Moi Government.

Among other reasons are;

Wako was one of Raila’s advocates in the 2017 election petition. He is very close to the Deputy CJ Justice Philomena Mwilu. The iron judicial lady is fighting graft allegations. The US is fully backing the antigraft war…driven by the DCI George Kinoti and Noordin Haji. Could this be Wako’s Achilles heel?

Like other former Presidents Kibaki and Moi, Trump suspects that Wako has secret accounts in Singapore, South Africa, Island of man and Switzerland. And US wants this cash repatriated back to Kenya.

The US has profiled five individuals who served in Kibaki’s Government and made a fortune. The Trump Government is demanding that new wealth accumulated between 2003 to 2010 be probed.

One of the 5 people on the radar is said to have a credit bank balance of Ksh. 20,000 by the time Kibaki became President.