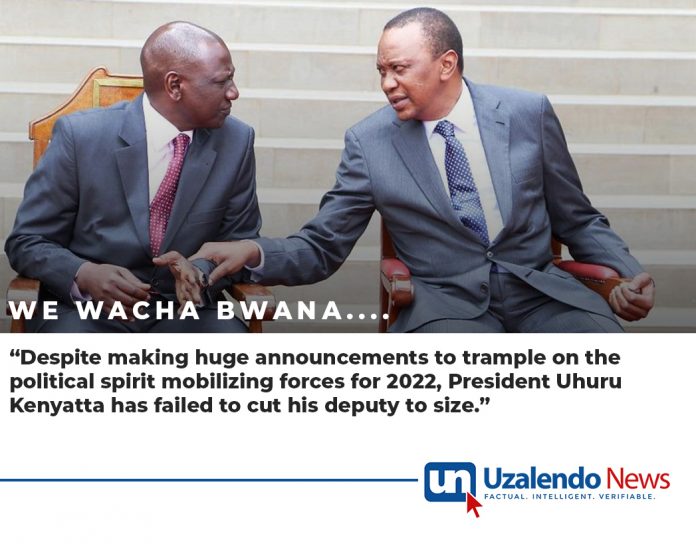 “A typical day in Kenya feels like an electioneering period. There are rallies everywhere, political alliances everywhere, until you realise its only 1 year into the term of their current president.” This is an actual excerpt from a post about Kenya on the Trip Advisor platform. – By Gerald Gekara.

Despite making statements aimed at stifling DP William Ruto, the King of Rift Valley has called the bluff on his boss

Ruto has been on constant occasions contradicted his boss concerning certain matters, including political rallying… This does not seem to swallow well for Uhuru.

Since a politician’s work is to woo masses, then drive off in high end V8s and fat allowances, one cannot simply stop them from doing their work. But there comes a point when the bickering starts to itch the boss.

The constant politicking and opposition has led to visible split in the Jubilee bus.

From knocking out key allies from important insitutions, to open calls for a referrendum, an idea that has been taken with a pinch of salt.

In his 11th Presidential Address, (that Ruto snubbed for a political meet with Kajiado ‘representatives’), Uhuru agitated for constitutional refferendum in line with the Building Bridges Initiative (BBI).

The BBI taskforce was the source of an ugly split in the Jubilee party, with the formation of two factions. Kieleweke – for Uhuru, and Tanga tanga for Ruto.

Ruto has strongly opposed the idea of a refferendum, touting that the move was meant to put people in office and not a genuine call for beter service.

He has accused the opposition for taking part in dirty politics inorder to derail his ambitions to the 2022 seat.

“Wameleta vitu mingi, mara ‘the system’, mara ‘Deep State’… All i can say to them is, let them try me. I have God and the People.” Ruto said.

However, one would not fault Ruto for trying to save his sinking ship. From being sidelined in crucial meetings, to constant public ridicule over Raila Odinga’s role in the post-handshake Jubilee government.

With all this unfolding before the BBI report is released, eyes will be cast on the political class, as the actions after will dictate how the state will proceed forward.

However, what Kenyans expect is coperation between the politicking and service delivery, instead of rallying for positions that do not benefit the commoner.

Maybe the BBI will find solutions to jail corrupt individuals, deal with fraudulent contractors and finally find a permanent fix to the rich-poor gap.