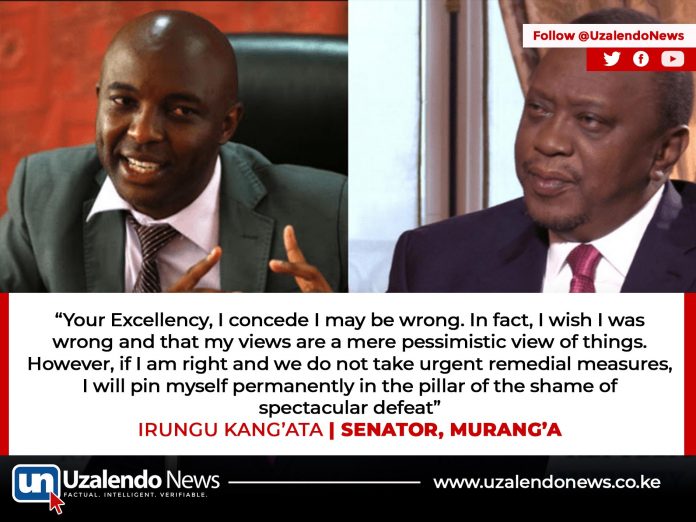 Kenyans are seemingly out of touch with their politicians. That is why they are feigning surprise at Murang’a Senator Irungu Kangata political letter to political “gentiles”. – By Henry Kimoli

Forget about the addresee. The St. Kangata damning letter, like that of the Biblical Paul to the Galatians has unruffled political feathers, far and wide.

Kangata is a brave man. Or whoever drafted and forced him to sign the letter.

He has elected to unmask the thinking of the Kikuyu nation early 2021….to aid those wishing away Kenya’s equivalent of the Florida presidential voting machine, known variously as GEMA vote.

Plainly put. Mount Kenya will reject the BBI flatly, unless it guarantees the community’s political and economic position.

Forget about the excuse that the community CANNOT vote for Raila. They can. But Raila has no DEFINITIVE tribal political numbers…capable of winning an election at 10am.

“Used” to the Presidency

The GEMA are “used” to the Presidency. The Kale’s are used to the warmth of the seat, 24 years on the trot vide Daniel Arap Moi.

The two communities can craft an emotionless political deal, like happened between Uhuruto in 2013.

The deep state then feigned support for Musalia Mudavadi…branding him a safe pair of hands…a fake accolade that sank Musalia’s presidential dreams in the abyss of the deep sea.

Kangata wants to force another Kalenjin-Kikuyu political deal….or whatever other proposition that will favour GEMA interests.

Kangata is not the problem. 2022 GEMA position is. And this is the prime interest that Kangata wants to serve.

President Kenyatta will officially retire on 26th of October 2022…unless the now silent COTU boss Francis Atwoli has his way.

The Kikuyus are in a post Uhuru Kenyatta mode. They are crying out for a fresh leader…. they need a political reboot.

This is the ‘intelligence’ Kangata is hawking to the conventional intelligence community.

Since 2002, GEMA has voted plainly for their sons…

Prognosis? BBI outcome has no effect to Kikuyu and GEMA voters.

Barring miracles, the community is done with the BBI and Uhuru politically…they will not buy his political direction….unless he is in it himself.

A political crisis is brewing in Central Province. And its major.