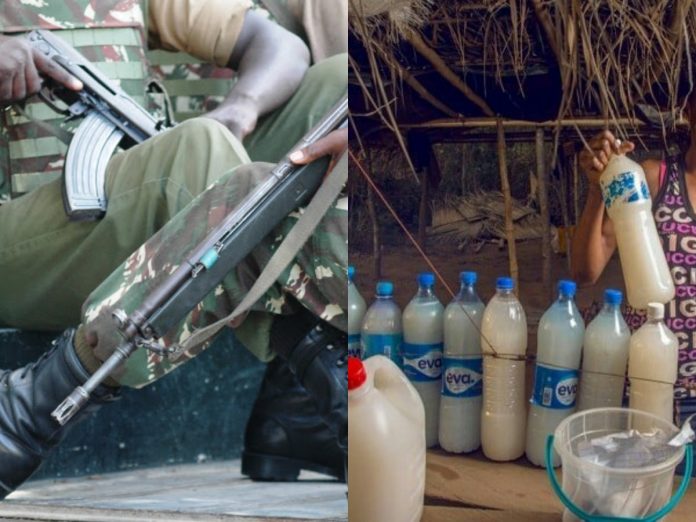 Bamba Police post in Kilifi county was again in the news after locals protested over increased police harassment within Bamba town and its environs.  – By Ramadhan Kambi.

The locals who spoke during the launching of the mutli-million water project at Rima Ra Pera village in Ganze Sub county said Bamba police had formed a habit of harassing mostly mnazi (local brew) vendors and then ask for hefty fines for their freedom.

One of the locals Amson Kahindi mostly known as Kizibo said the harassment has reached an alarming level and that the locals now live at the mercy of the police officers.

“They were brought here to serve us and not to harass us. We are now living at their mercy. They arrest our mothers, our father, our brothers and sisters and then ask for heavy fines that can range from as far as Sh5,000 and above,” said Mr Kizibo.

He called for the transfer of the Bamba Deputy OCS he said was the ring leader of the police problems in the region.

“Mr Governor, if the Bamba Deputy OCS can be transferred even today, we shall come back to you and celebrate. This person has brought a lot of challenges to us as the community. Instead of protecting us, he is leading his officers in harassing us,” said Mr Kizibo.

Another resident Jacob Fikirini also said that police harassment in the region has gone high with the officers harassing the locals without even proper explanation whenever they arrest them.

“They can arrest at their own will and they seem to have mastered the art of harassing our people.
that police station needs an overhaul because as residents, we have suffered enough in the hands of these officers,” said Mr Fikirini.

That prompted Ganze MP Teddy Mwambire and Kilifi Women Rep Gertrude Mbeyu to assure the resident that they will pick up the issue with the Deputy Inspector General of Police in Nairobi to have the said officer transferred.

“I remember you had a similar problem a year back and we had had the officer transferred. I thought that this matter had been resolved but because it seems to be a recurring problem, then we shall have to act again. But let us also remain focused and point to where the problem is exactly. If we have a problem bigger than removal of these officers, please liaise with us so that we can have a long-lasting solution,” said Mr Mwambire.

“We shall meet with the Deputy IG so that the said officers are removed from office. Peace loving residents cannot be harassed by money thirsty officers who end up taking even the small savings these communities toil for every day in form of bribe for their freedom,” said Ms Mbeyu.

Governor Kingi promised the residents that he will deal with it to have a long-lasting solution.

“The issue of police harassment is sad but we shall work on it, not even in Nairobi but here in Kilifi. We shall have a meeting with the concerned people and you will soon see the results of my engagements,” he said.

On Tuesday, the governor held a high-level security meeting with top security officials led by Kutswa Olaka. Details of them meeting remained scanty but it is believed that it touched on the state of the Bamba police post complaints from the locals.