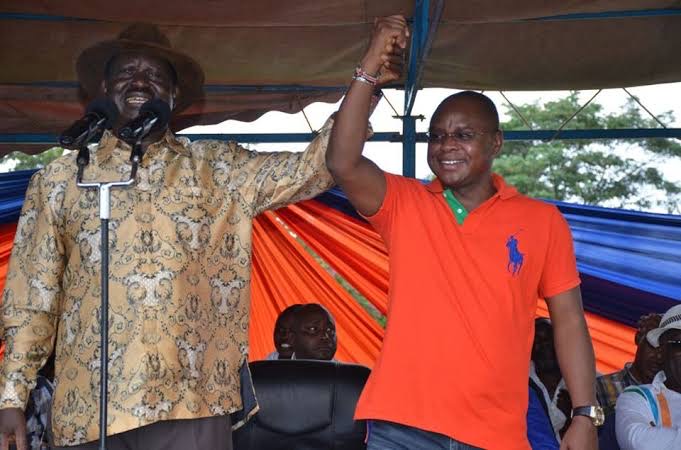 The race to succeed Kilifi Governor Amason Kingi in the next year General Election heightened after a new aspirant joined those that are vying for the top seat in the County.

Alphonce Dzombo Mbaru an engineer by profession has already hit the ground running, promising goodies for the people of Kilifi once elected to be the next governor after the exit of Governor Kingi.

With the entrance of Eng Dzombo into the race, the number of those eyeing the seat and who has official declared their stand are four. The first one to declare running for the seat is Malindi MP Aisha Jumwa, ASAL CAS Gideon Mung’aro, current Kilifi Deputy Govenror Gideon Saburi and now Eng Dzombo. Intial Kilifi north MP Owen Baya who was expected as a top contender for the seat dropped his ambition to support Ms Jumwa and Mr Baya will return to defend his Kilifi North MP seat in the next year General Election.

The number of those contesting for the Governorship is expected to rise as two other aspirants are rumoured to be in the race. They are Mr Baha Nguma and Mr Francis Baya.

Mr Nguma was the chief officer in charge of agriculture in the first regime of Governor Kingi administration and reports are that he has been busy meeting other potential aspirants in different positions including those eyeing MCAs, Senate and MPs seat from the county. He is also exe4pcted to announce his candidature by July this year.

Mr Baya, the former Ganze MP and a senior administrator in the Moi regime is also said to be planning his entrance into the Governor race.

Last week after his acquittal of charges of spreading Covid-19 to Kenyans, Eng Saburi said that he case was motivated by his political stand after he declared that he will succeed Governor Kingi.

“My case had a lot of political interests and we know that there are some cartels in Kilifi that are hell-bent on making sure that I don’t ascend to the top seat. But I want to assure them that I will be in the race in 2022 to succeed the Governor,” he told journalists in Mombasa after his case was dismissed.

Coming from the Chonyi sub tribe of the Mijikenda, Eng Dzombo is currently an Entrepreneur and the CEO-The Mardin Group of Companies in various interests and Sectors.

“I have been in the Political Journey since the year 1997 with the likes of the late Jembe Mwakalu, The year of the Second liberation. The Year of the Young-Turks- and ever since I have been an active but not a live participant in the search for an elective -Political Position till now.

My finger prints flow through so many Political parties I have participated in Building up Kadu Asili, Chama cha Uzalendo (CCU), Reform and Build Kenya (RBK), United Democratic Movement (UDM)-Gave them their first and only ward in Kenya; Matsangoni -long before Deputy President Dr William Ruto decamped from ODM to URP and later Jubilee after URP closed shop to merge with TNA,” Eng Dzombo says in his social pages he formed to push for his agenda.

“I ran for the Seat of the County Speaker of Kilifi County in the first term of devolution. The ODM Candidate, advocate Jimmy Kahindi won it. I have been a Trojan horse in building the Coast Political Agenda through various initiatives in the region like the Coast Peoples Forum, Jumuiya ya Kaunti Za Pwani  among  other regional progressive forces,” he added.

With the clock ticking towards the 2022 General Election, everything is as clear as a clear sky that it will be a battle in Kilifi County.

Governor Amason Kingi has gone mute on whom he shall support after the end of his tenure. He is currently championing for the formation of the Coalition of Coast political parties commonly referred to as ‘Tufe Letu”