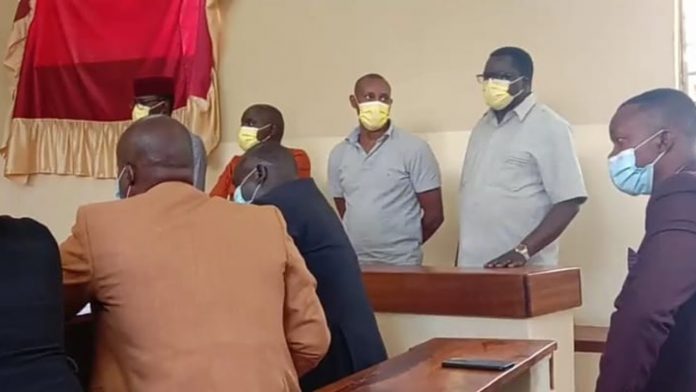 Nandi Senator Samson Cherargei, Chesumei MP Wilson Kogo,Didimus Barasa of Kimilili and Belgut MP Nelson Koech have been released on a bond of Ksh. 50,000 each. – By John Mutiso.

The four parliamentarians were arrested on March 4th 2021, for allegedly intimidating voters during the ongoing by-election in Kabuchai Constituency in Bungoma County.

Speaking on Friday while in court, the MPs termed their arrest unlawful and accused the government of using independent agencies to intimidate leaders associated with Deputy President William Ruto.

“It is a sad state of affairs that police and Judiciary being used to intimidate leaders from some political persuasion,” said Koech.

The leaders denied accusations that they were carrying weapons in their vehicle to cause chaos and disrupt voting. The legislators had their guns confiscated, but they said they had licences and had not been misused the weapons.

Cherargei yesterday termed their arrest a plot to intimidate UDA supporters, adding that police were yet to tell them why they were arrested.

“We had just escorted our candidate from voting and addressed the press when they blocked our convoy claiming we have weapons,” he said.

Kalasinga garnered 19, 274 votes which represent 65 per cent of the total votes cast where his closet challenger Evans Kakai of UDA got 6,455 votes representing 22 per cent.