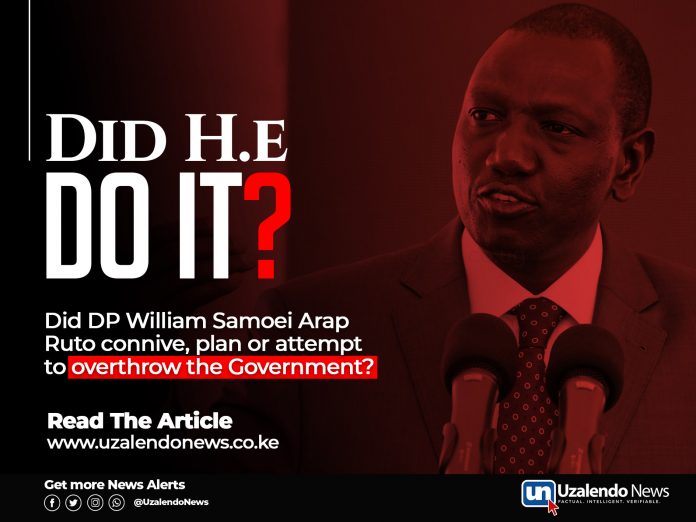 Did DP William Samoei Arap Ruto connive, plan or attempt to overthrow the Government of Kenya?

The hard, grave question as to the Uhuruto bedrooms affairs spill to the corridors

President Kenyatta reportedly told his Central Kenya political gang that his Deputy committed treason right under his nose. And for that, he should get zero votes from the region.

Uhuru provided the fall of his political buddies in Central Kenya as evidence of the treason.

In so doing, the President has corroborated allegations by Michael Waweru, the Jubillee Elections Board official that Ruto rigged out politicians close to the President with the aim of impeaching him later.

Then the Bomb Shell. Ruto attempted to woo Raila into an alliance, behind Uhuru’s back. Grave allegations these.

In 2008, it is claimed Ruto attempted to stop the formation of a Coalition Government between Kibaki and Raila.

Ruto reportedly demanded the ouster of Kibaki altogether. But Raila rejected the idea and formed the nusu mkate government.

The narrative in the hearts of the 1960’s generation in Central Kenya is that Ruto hates the community.

The likes of Sally Kosgey, Henry Kosgey, Reuben Chesire, Franklin Bett, Nicholas Biwott were retired by Ruto. At the prime of their politics.

Kibaki had rationalized the civil service, the Military, the Police, and the Judiciary to reflect the face of Kenya.

He weaponized the sacking of Kalenjins by Mwai Kibaki between 2002 to 2005 to cement Kalenjin nationalism.

Ruto style is to revolutionalise his politics at every cycle. When he found himself on the red carpet at the Presidency, he applied the same principle in Central province.

Unfortunately, this aggression outside the Rift Valley is a political coup. And for this, he is a marked man in Central Kenya

Then there is the small matter of Anne Waiguru. The Minji Minji lady was a system hard core. A perceived confidant of Uhuru since his treasury days.

Waiguru was viewed as the Total woman of the UhuRuto first term in office.

She was law and law was Waiguru. She or her cronies opened commercial banks at 3 am to transact. Now she has joined Ruto and is a mega threat to the system.

So why is Ruto in trouble?

George Saitoti was a Moi confidant. Until intelligentsia intercepted communication that he wanted to retire Moi.

Saitoti was linked with the Elijah Mwangale political defeat by Mukhisa Kituyi in 1992. He allegedly planned the defeat of President Moi Uhuru project in 2002 by Kibaki

Ruto has been growing his financial clout steadily since his YK 92 days.

He has a complex Web of businesses that he has steadily grown as a capital financial buffer for his presidential bid. It is not clear how much he has added since his elevation to DP…but he is not a poor man

He has never liked the Kikuyu community because they stand between him and his State House ambition.

Ngina is a cult hero in Central province and in most parts of Kenya. She is regarded as the Queen Mother by most Kenyans.

Insulting her for whatever reason is regarded as a political folly of sorts.