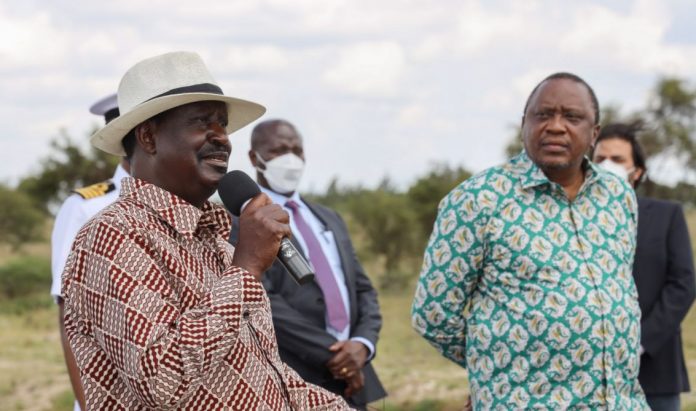 Raila Odinga has responded to critics who bashed the ODM leader for meeting President Uhuru Kenyatta after contracting COVID-19. – By Gerald Gekara.

The ODM leader said he had been sick from the virus, but now he is okay.

(Kenyans you know I was Discharged. I have now appeared in public for the first time since I was admitted in hospital.)

On addressing the burning issue of the coronavirus containment measures, Raila urged Kenyans to consider the bigger plan of the government to save lives.

“I know most Kenyans are suffering economically, but the most important thing is ensuring that the lives of Kenyans are actually acprotected, ” Raila added.

Raila spoke after an extensive tour of projects by the Jubilee government in Nairobi.

President Uhuru Kenyatta was flanked by the ODM leader as he toured the Nairobi Metropolitan Services project, Green Park Terminus.

Thereafter the duo proceeded to the Internal Container Deport located at the Industrial Area in Nairobi.

Uhuru commissioned the 4.2 Km road that will be majorly used by heavy transit trucks that have been causing traffic snarl ups along Mombasa Road.

The president proceeded down-south to officially commission the 48km Ngong-Kiserian-Isinya and the 43km Kajiado-Imaroro roads in Kajiado County.